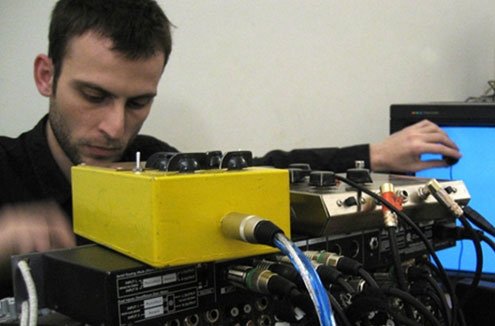 Palermo-born Valerio Tricoli: Seeking to "epitomize the uncanny in the realm of sound."
O

f all the record labels working at the fringes of sound art, few currently come with the cache of Berlin’s PAN. Founded by Athenian Bill Kouligas in 2008, PAN’s releases come with a very clear (but increasingly diverse) aesthetic and fascinating sounds from names like Lee Gamble, Rashad Becker, Heatsick, and Bass Clef.

Most recently, Kouligas has given a platform to Palermo’s Valerio Tricoli with Miseri Lares. It is no small order to suggest this is one of PAN’s most flatly challenging listens.

Tricoli is not an unknown quantity, however. The Italian has made his name in the experimental music world over the years for his talents with tape recorders. Whether it’s your average mic, a reel-to-reel unit, or a dictaphone, Tricoli has tried them in a wide variety of forums: There was his band 3/4HadBeenEliminated. There were acclaimed collaborations with Antoine Chessix and Thomas Ankersmit (on PAN, no less).

There was also his solo work, though that has taken a back seat in recent years. Miseri Lares is a return of sorts and allows Tricoli to expound on his own ideas, free of interference, for the first time since 2006’s Metaprogramming From Within the Eye of the Storm. He does not disappoint with a “contemporary take on musique concrète” channeled via digital processing and a Revox tape recorder. It also has very little to do with his recent cassette split with Kouligas.

Interestingly, Miseri Lares started out as a live work. First presented at the 2011 l’Audible festival in Paris, Tricoli composed much of the album in Berlin and Munich over the course of the last three years. Since that performance, the sounds have evolved and the piece has grown increasingly dense — in meaning and in instrumentation.

“La Distanza” sets the tone perfectly with an extended fade-in. The 16-minute opener is powered by periodic whispering at just the right level to be heard but misunderstood — you can’t hear what exactly is being said (or what language it’s being spoken in) but you know very clearly that the voice has something to say. Occasionally, you can catch a phrase like, “The thunder rises.” It is tricky to put in context amid creaking doors and what sounds like a gunshot.

The words are a mixture of English and Italian. They are also from a wide range of sources, from Dante to Ecclesiastes to H.P. Lovecraft to Tricoli himself. The narrative is intentional but what are we to make of it as listeners?

This is the harder question, though it’s clear that Miseri Lares does not occupy a psychologically relaxing space. “Hic Labor Ille Domus et Inextricabilis Error” breathes torpidly. There are the field recordings and constant glitches flittering about your speakers on the 15-minute title-track. Distant thunder and what sound like owl hoots on “In Your Ruins Is My Shelter” are about as calm as the record gets.

Ultimately, you’re left to decide for yourself whether Tricoli really nails his aim of “epitomizing the uncanny in the realm of sound.” The conceit is self-serious but Tricoli sells it with all the conviction his musical career can muster. It is far more than just something to think about. And for PAN, it is far more than just another release.