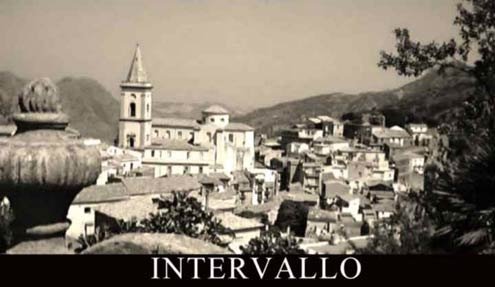 ilms in Italy are messily chopped in two, a primo tempo and a secondo. A mid-scene fracture is more likely than a graceful fade-out. Then comes the intervallo, intermission.

The tradition annoys North Americans and Britons who like their meals in a single sitting. Interruptions are unnatural.

Not for Italians, who expect it and use the 10 minutes to chat and flirt. In less fashionable days vendors trawled the aisles in stained coats, eventually idling under the screen with their flimsy wooden aprons jutting forward. Bored, they rarely said a word. You came to them.

People bought cold popcorn and tinsel-wrapped ice cream bars, which they opened and licked avidly, afterwards lighting cigarettes whose ashes were carelessly wrist-flicked forward. Behind each seat were rarely-used ashtrays in the shape of cast-iron mandibles. Some of the vendors smoked.

Smoking was banned years ago and vendors are a dying breed.

But the sacred intervallo endures (so do daily show-times that begin only at 3:30 p.m.). Italians want time out to gossip and send text messages. They dislike being hushed. Intermission chitchat often spills into the start of the secondo tempo — or second half.

I’s an anachronism that ignores the accelerated ingenuity of postmodern times.

Who thinks in halves any more? Who breaks a storyline — or anything for that matter — to indulge a brief and lazy middle? Better to make it short than break it. The Internet has no intermissions. Sending, receiving, searching and networking belong to a lifespan-long dance scored by an automated orchestra that never takes five.

Again, not so in Italy, where the off switch still works better than on. Conversation, two parts indolence, one part wit, still thrills more than email. Most rural areas still lacks Internet connections, let alone ADSL and Wi-Fi. Download is not a common word. Though Facebook is explosively popular, it arose from zero.

Italy honors its parochialisms with a straight face, which in turn makes for remarkable headlines. “Woody Allen’s voice is dead” was a recent one. In fairness, this was true — up to a point. The actor who dubbed Woody Allen since “Annie Hall” died recently.

In truth, most Allen-lovers had only ever heard the comedian’s “Italian” voice (and those confronted with “real” one often winced); so the actor’s death was Woody’s by proxy. Italy is unique among major European countries in needing to dub all foreign films lest the audience be asked to endure troublingly non-Italian sounds. This sets English-teaching and marketing back eons: Intimate female hygiene is happily sold under the brand name “Chilli” and electronic security doors manufactured by a company called FAAC.

But quaintness never satisfies veteran skeptics. In some cases it just makes the bad seem far worse. Add up Italian eccentricities and you get a cartoon nation that’s not funny.

British writer Sebastian Cresswell-Turner spent a few years here at the turn of the century and emerged with the hardly new conviction that Italians are consummately non-professional, lack any understanding of serious commitments, are hopelessly anarchic, and amount temperamentally to a race of infants: “All the noise and all the grand promises and all the superficial allure of the show are merely a flimsy veneer covering the sadness and futility that lie at the core of Italian life.” The only antidote to “impotent fury,” he concluded, was wine and sunshine. Same old story.

Foreign Italy-haters are only half-as-fierce as Italians themselves. “We are bad soldiers and bad citizens, but as poisoners we have no rivals in the world,” the late Indro Montantelli told me in 1977.

There’s nothing utterly wrong or basically flawed about such organized loathing, nor are those who simplistically consider Italy a “failed state” dishonest. What they fail to do, however, is apply speculative thinking to the absolutes of sadness and futility.

Unlike its more driven Western partners, Italy has refused to relinquish its preference for the day-to-day, making it postmodern before the term came to use. Nothing is so important to Italians that they will forgo the diversion and drama that drives and sustains all facets of personal life, which is the only real life. Distraction, not concentration, is the default position. Resistance to change is noble, irony essential, maturity a mood and multitasking a survival skill. Urgency is useless because nothing happens fast. Complaint is an energy drink.

Ironically, this eager resignation puts a game face on that which existentialists (and others) insist is inevitably sad and futile — namely life itself.

The downside of the approach is already in evidence. But in Italy’s defense, and in lieu of always siding with the progressive world’s self-important road rage, consider another paradigm. Look at Italy’s long-term view as one that puts the intermission, and not the movie, in the middle of things. Eating cold popcorn, a bird in hand, is better than worrying about the fact that it’s not hot — a lesson about patience and acceptance that recession-humbled nations are gradually coming to learn, and which otherwise sad and futile Italy is uniquely qualified to teach.