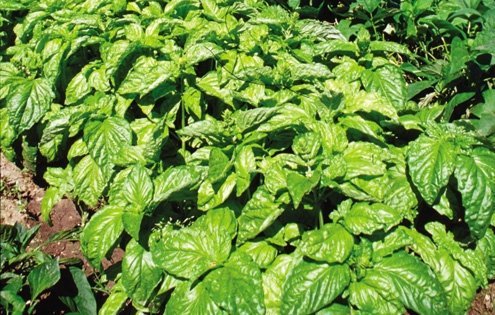 Going lip-to-lip with basil can make you passionately happy.
I

n Boccaccio’s “Decameron,” Isabetta falls in love with Lorenzo and the couple has a secret love affair — until Isabetta’s brother sees her sneaking into Lorenzo’s room one night. Enraged, the brother kills Lorenzo, buries his body and fabricates a story in which Lorenzo’s disappearance is explained by a last minute business trip. But the ghost of Lorenzo appears before Isabetta to tell her the truth and to reveal where his body is buried. Under the darkness of night, Isabetta goes to his grave and uncovers her lover’s corpse. Unable to carry it away, she grabs his head and hides it inside a pot of basil. Each day, she waters the basil with her tears.

It is no wonder the aromatic herb is an important symbol of passionate love in Italy. If a woman places a plant of basil at her window at night, it means all is clear and she is ready for a visit from her lover. A man who accepts a sprig of basil from a woman is as good as married.

Ironically, step further back in time and basil was a symbol of evil or the Devil (to the ancient Greeks). To the Romans, basil was a symbol of hate. They believed that if you chopped up the herb and put it under a rock, a scorpion would be born. They also observed that the more basil was abused (ripped up or stomped on), the more it prospered. In fact, legend says the Romans shouted insults and curses as they planted the herb. An archaic French expression for raving lunatic-like behavior is “semer le basilic” (sowing the basil).

In the 1600s, basil (a proven stimulant) was re-examined and thought to bring passion and happiness to those who munched on its leaves. Other medicinal properties were attributed to the fragrant plant such as soothing stomach cramps and fighting migraine headaches. Some believed it keeps mosquitos at bay.

Italy’s favorite herb comes in dozens of sizes and fragrance intensities. The most common basil is Basilico Genovese with oval-shaped leaves considered to be among the most aromatic.

Lettuce Leaf basil can be found in markets from Tuscany to Sicily. The Naples area has another particularly pungent version called Napolitano Bolloso, also with large cabbage-like leaves. Other cultivars include Fino Verde (with tiny leaves), the bush life Foglie Piccole with a slightly spicy taste, and Violetto Aromatico with deep purple to black leaves.

Others include lemon basil, anise or cinnamon basil. Its name comes from basilicon (or “royal”) and an expression says a plate of pasta without basil leaves is “like a beautiful woman without a soul.”

— Lightly mash the garlic and wash and dry the basil leaves. Put the garlic, basil, pine nuts and salt into a large marble mortar. Using a hardwood pestle, with a rotary movement, grind all the ingredients against the side of the mortar. When you have a green paste, add the two grated cheeses and mix them in evenly.

— Add the oil in a thin stream last. Pesto can be added as a topping to any kind of pasta such as trenette or fettuccine (dilute the pesto with a tablespoon of the hot water the pasta was cooked in so that it spreads easily. The pesto should not be heated). In Liguria, boiled potatoes and string beans are sometimes added.