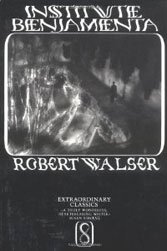 By Robert Walser, translated from the German by Christopher Middleton

Concepts of modernity were largely a byproduct of the Industrial Revolution and parallel scientific advancements that confusingly tugged at Western society’s class-oriented cape. But what did modernity mean to the soul? How would the assembly line affect centuries of social obedience? The late 19th-century question nagged at German-language authors more than most, and Swiss author Robert Walser tackled it head-on with a groundbreaking diary-style novel that not only streamlined narration but also helped lay the groundwork for any number of “rebel without a cause” anti-heroes, J.D. Salinger’s post-World War II Holden Caulfield among them.

Walser’s 1908 work introduces Jakob von Gunten, an irrepressible young man from a small city enrolled by his family in the Instituta Benjamenta, a “forming” academy run by an eccentric headmaster and his equally unusual sister, each one at psychologically and sexual loose ends. The schoolboys are cadets and their “teaching” intended to pummel and humble them until they’re resigned to the caprices of an unfair world. But quirky Jakob, who sees a dog not as a dog but as a “little animal extravagance,” swiftly becomes a human extravagance in his own right, a subversive nobody who sees the modern condition as an occasion to insist on turmoil, paradox and irony. “Nothing pleases me more than to give a completely false image of myself to people for whom I have made a place in my heart.”

Comic but belligerent Jakob accepts his repressed fate (“we must be small”; “we … are poor dependent dwarfs, obliged to be continuously obedient”) while constantly mocking the obedience to which he insists he’s beholden. He is a craving “zero” who still sees himself as a potential “founder of a religious sect of movement.” Jakob’s “modern” contradictions, both emotional and sexual, create a happy but subversive slave. He loathes sentimentality (“I’m never sad”) but is happily amused by the sentimental, a kind of facile impressionableness that presages the yes-man Nazism that lay in wait. “Can anyone console a Jakob von Gunten?” he asks. Not likely. But beneath the funny, self-hating muck is a boy waiting for his ruler. Freedom, for Jakob, is “cold and beautiful,” a vixen: “Never fall in love with it!” So it is that modernity becomes just another word for nothing left to lose.

Walser was a writer of immense contemplative gifts whose vision of modernism uncannily anticipated irony-laced postmodernism. Plagued by lifelong mental illness, he died in 1956 outside the Swiss asylum where he’d lived by choice for 23 years.