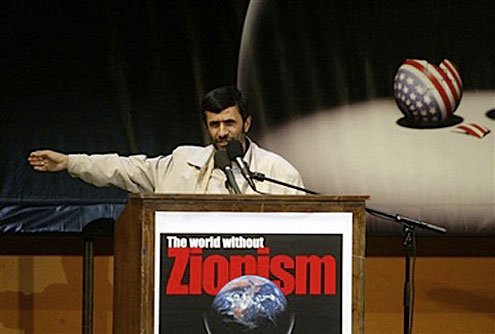 Ahmadinejad, above, is Iran's anoited bad boy. French riots are not going away.
I

My recipe against the suffocating thicket of headline news is simple: Distill the words, stir in modest reflection, peel away the hype, and serve warm. It’s not a gourmet meal but it helps. Here are a few portions.

“Evil yes, mad no: ‘Messages to the World,’ A review of writings by Osama bin Laden”

Midway through his review of Osama bin Laden’s collected writings, the Guardian’s Peter Preston observes that the book “is full of brusque, slightly surprising judgments,” foremost among them bin Laden’s calling Saddam Hussein “a thief and an apostate.” What’s truly astounding is Preston’s surprise. Saddam Husssein was a secular dictator, a wannabe Stalin. Osama and Saddam detested one another. That the mutual dislike was falsified into suspected “buddyhood” to justify overthrowing Saddam doesn’t void the enmity. Saddam or Egypt’s Hosni Mubarak would have jailed Osama, just as Osama would have worked to undermine secular Iraq under the right circumstances. The circumstances now exist on a silver platter, and the likes of Abu Zarqawi are exploiting them diligently.

Bottom line: Secular dictators think small. They want control over their own nation and seek to intimidate neighbors. Visionaries imgine skyscrapers in flames and transnational coercion. Why is it still so hard to separate the two?

Unpleasant but wholly unoriginal. Iran walks a tightrope. It seeks to broaden Western commercial and political ties while remaining on the right side of revolutionary rhetoric as a religious war rages in neighboring Iraq. Ahmadinejad’s croaking fuels the latter. Soon after his remarks, Iran went back to negotiating the delicate issue of nuclear development. Iran founded modern Islam-for-export in 1979 and has no wish to fall afoul of its newer promoters, some of whom it secretly assists. At the same time it remains a largely sensible state that would much prefer to prosper as others fight. To sustain its regional position while expanding economically it must appear both arrogant and conciliatory. Ahmadinejad’s tough guy antics give him revolutionary stardom, but how long such a reel can play effectively in a country where corruption and drug use are rampant is dubious.

Bottom line: Ahmadinejad’s intimidation reflects Iran’s growing insecurity (and his own) more than any feasibly threatening intentions. The revolution is ailing.

It’s impossible to see acres of charred flesh without wincing. In essence, RAI24 charges American forces with indiscriminately using “white phosphorous,” an illuminating and burning agent, to root out and kill occupants of besieged Fallujah (link below). But — and it’s a big but — the report is slyly manipulative. Vietnam-era napalm explosions are set to “California Dreaming” (which the report said “GIs listened to at the time.”) Muslim prayer chants are dubbed against gruesome shots of mutilated bodies. Two U.S. veterans, Il Manifesto reporter Giuliana Sgrena (hardly objective), and a former British parliamentarian are interviewed and speak damningly. But the producers ignore rebuttal, which allegations of grave atrocity demand unconditionally. Accounts of the Fallujah battle by other news sources are not cited. Absent also are U.S. officials and experts on chemical weapons and human rights law. “The images speak for themselves,” the RAI24 news editor explained. But in contentious times, they don’t, or shouldn’t — no more than propaganda footage of military success should validate unconfirmed truths. RAI24’s resistance to balance creates an equal and opposite imbalance. Even anti-war, anti-Bush talk radio host Amy Goodman, probing the allegations, prevailed on a U.S. Army spokesman to comment (“[white phosphorous] is a perfectly legal weapon to use by all conventions of land warfare,” said Lt. Col. Steve Boylan.)

Later, the BBC got the same explanation from Pentagon spokesman Col. Barry Venable. “White phosphorus,” he insisted, “is an incendiary weapon, not a chemical weapon.”

Bottom line: Haste makes waste. Flawed journalism is most irresponsible when it advertises awfulness as an end in itself. That’s what resource-rich RAI 24 did. Had the report been more comprehensive (Seymour Hersh’s My Lai work is a good example) it might have established the authority necessary to preempt half-hearted damage control. But RAI24’s desire to to air sensational images on the anniversary of the battle greased around too many corners, using the promiscuous footage as justification. It’s not enough.

The debate doesn’t minimize a constant: Rage. There’s rage among young rioters, among astringent police, among French citizens who believe illicit outsiders rule the day. But France’s inability to quell the problem offers a nation united only superficially, its livid “newcomers” split from a shocked establishment with no navigable middleground. That the French revolt is being engineered largely by disaffected ethnic youth (not the middle class university students of 1968) suggests that European integration is capable of faking its own reality. The persistence of the unrest demonstrates how readily urban disenchantment snacks on its own nasty energy. But France has little credible defense against its resistance to making itself a nation of the many.

Bottom line: An essay by 27-year-old Karim Amellal, published in Le Monde, speaks to the point: “We have waited too long to create symbolic and broad-based social, economic, cultural policies that gives neighborhood youth a desire to succeed and a taste for living together.” Failing that, the deluge.

Demoralizing and predictable. This much is sure; the war in Iraq no longer belongs to George W. Bush. It belongs instead to his legacy, and that legacy is already on shaky ground. We’re in November 2004, two years before an election year and 12 months before bitter campaign sparring starts in earnest. Having failed as a terrorist cure-all, the war will fall into the lap of Bush’s successor, much the way Lyndon Johnson surrendered Vietnam to Richard Nixon, who bungled it until opting for strategic retreat. Arguing over the pathological deceits that permitted the war — delusions, half-truths and con jobs — is secondary to unearthing a forward strategy. Establishing rudimentary order is the obligatory but daunting goal. Iraq under the next president will gradually be “returned” to its owners, much the way marred Vietnam (on the pretext of self-determination) was given up to the (north) Vietnamese. The Iraqi transitional period will yield further bloody social and political upheaval, and within a decade an indigenous insurrection will usher in a new secular strongman — but he will not be labeled a dictator. The circle will be unbroken.

Bottom line: Ultimately, the war will be seen in the same light as its ill-fated precursor of the 1960s: Ill-advised, ill-managed, costly, largely without coherent purpose. Veterans will openly question what they fought for, as well as criticize the strategies employed. This will be followed by moody and acclaimed Hollywood films on the meaning of the war. History is scornfully repetitive.