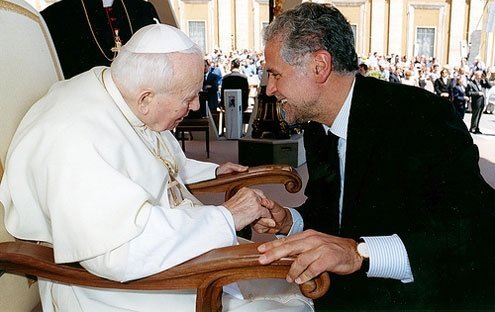 Pope John Paul II and Roberto Formigoni in 2004.
I

In “La Lobby di Dio” (“God’s Lobby”) Pinotti persuasively argues that Comunione e liberazione — known in Italy as Cl — is more powerful than Opus Dei, more well-oiled than freemasonry, and more “plugged in” than Confindustria, Italy’s manufacturer’s association. According to Eugenio Scalfari, the longtime editor of the daily La Repubblica, “Not even the Mafia has so much power. In hospitals, healthcare, universities….”

Known in the United States as Communion and Liberation, Cl’s tenets are often confused with those of Marxist Liberation Theology. They couldn’t be more different.

But Pinotti avoids these traps. Although he acknowledges that Cl brings friendship and spiritual comfort to thousands, he is disturbed by how it stifles personal freedom and perpetuates Italy’s patronage system.

Cl began as a student movement founded in 1954 by priest Don Luigi Giussani at Milan’s Berchet Liceo classico. Gioventù studentesca, its original name, emphasized communal activities and sought to fill the existential and spiritual voids of adolescence. Virulently anti-Communist, it was a Catholic alternative to the radical youth movements of the 1960s. John Paul II officially recognized Cl in 1982. Group activity sustains its Christian message. The Ciellini hike, sing and study together. Later, they do business together.

Pinotti covers Cl’s political and economic power, its recruiting system, legal battles, its dissenters, and its future. He clears up common confusion with the more elitist Opus Dei.

He also confirms some gossip. Roberto Formigoni, president of the Lombard region (who got Berlusconi’s dental hygienist Nicole Minetti her political post) has been a Ciellino since the early 1960s. He belongs to the exclusive Memores Domini order, lay friars who vow poverty and chastity, live communally, and give their worldly possessions to Cl. However, Formigioni, considered a possible heir to Prime Minister Silvio Berlusconi, has been pictured vacationing on a luxury yacht.

Pinotti also confirms the urban legend that top medical posts are reserved for Ciellini — quoting Enrico De Alessandri, a former manager in the regional government, who was fired after criticizing Cl.

The book contrasts Cl’s spiritual mission with its political and economic ambitions, which it pursues through its network of personal alliances. Ciellini connections notoriously trump experience or professional credentials when it comes to getting a job.

Cl’s other source of power is its “economic arm,” the Compagnia delle opere (Cdo), which flanks its religious communities, retreats and youth activities. The Cdo is a professional and commercial network with 35,000 members, including 1,000 NGOs, 41 offices and annual turnover of €70 billion. Yes, that’s right: billion.

Joining Cdo gives members access to favorable loan and insurance conditions as well as connecting them to a national network. It holds an annual fair where members and non-members can seek a piece of the pie. Cl says its business activities represent a “third way” between Wild West markets and East bloc central planning. Its mantra is “more society, less state”.

The best example of Cl’s reach and modus operandi is the Lombard healthcare system, which absorbs 70 percent of the region’s budget and is admired for its vaunted efficiency and its mixture of public and private service.

Cl’s healthcare power is both administrative and financial and tightly intertwined with the region’s ASL system (local health care). Twelve of Lombardy’s 48 ASL directors — some appointed by Formigoni himself — have Cl connections.

Cl’s power in Lombardy healthcare derives from a 1997 regional law under which the region reimburses the private sector for specific treatments. The goal was to shorten waiting lists and introduce consumer choice. Now, €8 billion of the total €16 billion spent on healthcare goes to these private facilities.

Lombard taxpayers annually spend €600 more in private care than other Italians and private medical facilities hog lucrative operations such as cardiac, hip and knee surgery. Lombardy surpasses all other Italian regions for these operations. There are 25 authorized cardiac surgery centers in Lombardy alone. All France has just 23.

Many of these private facilities are owned by Cdo members, though they were built with public funds. Others such as Milan’s Niguarda hospital and Brescia’s ASL are Cdo members. Italy’s Corte dei Conti, the country’s office of management and budget, has found evidence of fraud. So far, nothing has stuck.

Healthcare promotes Cl’s ideological mission. Many hospitals refuse to perform abortions and 80 percent of Lombardy gynecologists are “conscientious objectors.” Cl has decreed that aborted fetuses must be buried or cremated, to emphasize their “individuality.” And Cl flouted an Italian court ruling allowing Beppino Englaro to remove the feeding tube from his daughter Eluana, in a coma for 17 years.

This and its anti-communism have made Cl the natural partner of the right. Don Giussani had called Berlusconi a “man of Providence.” Berlusconi was an original backer of the organization’s magazine “Il Sabato” and first visited Cl’s national convention in 1987.

But Cl’s reach isn’t limited to conservatives. Pier-Luigi Bersani, the left’s former leader, is a friend. Relations between Cl and the Lega Nord, once hostile, are now cozy. The showcase of Cl power is its annual meeting. This power-politics mating game has something for both Cl and illustrious invitees such as Bank of Italy director Mario Draghi, Vatican bank director Ettore Gotti Tedeschi, Fiat’s Sergio Marchionne, influential banker Corrado Passera, and politician Francesco Rutelli.

Not everyone stays loyal. Arturo Zannelli, former head of Cdo in Calabria, turned on Cl and denounced its simple but “diabolical” system: “I groom the relationship with the politician, he gets the money, I hire the people and he gets the votes.”

Many say that because Cl keeps young people out of trouble and spreads Christ’s word, its paradoxical pursuit of earthly power is forgivable.

It is a risky paradox. For advice on managing it, Cl leaders might want to re-read Christ’s words in Matthew 6:24. “No man can serve two masters: for either he will hate the one, and love the other; or else he will hold to the one, and despise the other. Ye cannot serve God and mammon.”