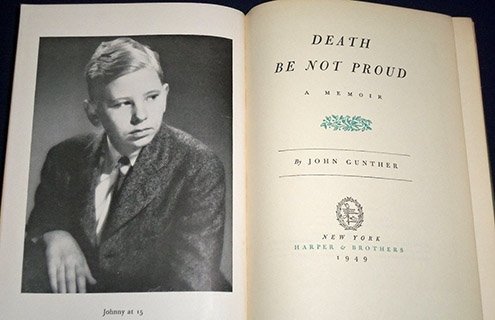 John Gunther had intended "Death be Not Proud" as a private memoir for friends, but was persuaded to publish it for mass audiences.
W

hen we went for ice cream the subject was death. Not the death of ice cream — unthinkable — but the death of my father’s friends, to him an abruptly regular occurrence. While I dug my spoon into a butterscotch sundae, diligently rotating its rounded belly to make a kind of porridge, my father went on about the latest dead friend, this time an author named John Gunther.

I knew the name. I’d seen his books in my father’s library. I’d even seen his picture on the back flap. I liked pictures. But aside from that, Gunther’s death — and even the idea of someone ceasing to exist — was of absolutely no importance to me, particularly in the presence of a butterscotch sundae.

My father had known Gunther from before the war, when both worked in Europe. Much later, I read Gunther’s 1947 book, “Inside U.S.A.” — he helped pioneered the “inside” genre — in which he wrote about his “long circumnavigation of the greatest, craziest, most dangerous, least stable, most spectacular, least grown-up, and most powerful and magnificent nation on the planet.” The juxtaposition of spectacular and least grown-up hasn’t gone away.

One complication of fathering a son deep into human life’s restricted decades is the likelihood of having to talk to that son about death when he would prefer to lick ice cream. My empathy for his melancholy and his stories of Gunther was in passing.

What I didn’t know at the time, and what my father didn’t mention, was that Gunther’s most famous book, “Death be not Proud,” was a memoir about the death of his son, a cathartic book written friends only but one he was convinced to publish to help console parents who’d lost a child to an incurable illness. Sentimentality and personal travail was generally avoided, particularly after the slaughter of the war, a stiff-upper-lip position the “least grown-up nation” has since modified to its detriment.

What my butterscotch distracted me from was that each time my father lost a friend in his 70s he was also announcing his own, one I’d inevitably witness close up beginning little more than a year later. His lament was a between-the-lines hint to a clueless son. So was the line, “There will come a time when I’m not hear to help you,” something that seemed impossible, since if he wasn’t around who would ensure my supply of butterscotch and model airplanes and take me to exotic locations like London, East Berlin, and Istanbul. The lament also teased out the memories and intellectual curiosity that eventually led to reading John Gunther, a John Gunther who, like my father, loved his country but worried about the future of an America whose worst characteristics were “covetousness, ignorance, absence of esthetic values, get-rich-quickism, bluster, lack of vision, lack of foresight, excessive standardization, and immature and undisciplined social behavior.”

For the author of “Inside Europe,” “Inside Asia,” and “Inside Latin America,” the U.S. was an “enormously provincial nation,” a discrepancy between external influence and internal parochialism that left him startled.

Gunther and my father belonged to a breed of intuitive thinkers who arrived at a sense of things based on knowing place, people, history, language, and being sensitive enough to recognized that topography and waterways, climate and poverty — the composite culture of a nation, the quality of its sundaes included — mattered as much as dissecting the ideology it rolled out as wallpaper.

“I do not know any country that is so ignorant about itself,” wrote Gunther of the United States in 1947. It’s an assertion that hasn’t lost pertinence, and when Gunther died on May 29, 1970 my father mourned a kindred spirit, just as I mourned my own kindred spirit, and mentor, four years later.