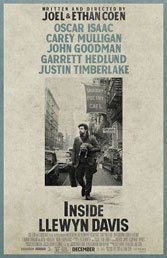 The Coen Brothers have traditionally spiked their films with ample doses of the surreal, the cruel and the comically absurd, sometimes all three. Not here. Instead, they’ve made a linear if gently melancholy story about an early 1960s singer-songwriter from the Rockaways trying to make it as a folk singer in the West Village after the suicide of his singing partner, an event that suffuses the story’s inner liner notes. Llewyn Davis (Oscar Isaac) is neither famous nor outstanding, but he cares about his craft — which he sneers at for going the way of novelty songs and the pseudo-folk of the period’s Peter, Paul and Mary-like groups. He plays the Gaslight, his local Village club, along with fellow folkers Jim (Justin Timberlake) and Jean (Carry Mulligan). He has an album that’s going nowhere. He wants royalties that he’s never going to see. He travels to Chicago on a lark only to find himself cooped up in beat-up car with a rudely obese jazz musician (John Goodman) and a laconic poet (Garrett Hedlund) on his way to being told he won’t make it in Chicago either (maybe he should find a partner, a promotor tells him).

When all’s said and sung, this is a highly personal nod to the New York folk scene before Bob Dylan came along and turned it sideways, though even that sideways plunged it headlong into toward rock, all but ending an era. Davis, a former Merchant Marine sailor, wants to believe, but belief doesn’t pay the bills or spare him from flopping from couch to couch, getting girls pregnant (including Jean), or absentmindedly losing a friend’s beloved cat.

“This folk shit, I don’t know,” says the promoter at the Gaslight, content to watch the good and the mediocre come and go. But the Coens thankfully zero in on charismatic Guatemalan actor Isaac, who has a good voice and delivers sincerely bumbling Jewish foibles. His sweetness and disappointment anoint this nostalgic dirge— a riff on the real life and times of Brooklyn-born folk singer Dave Van Ronk (1936-2002) — and greyly romanticizes a New York City time Joel and Ethan Coen clearly hold dear. Davis and his world will disappoint anyone who expects a realistic look at the period’s folk scene. This is fiction low on vibrancy but heavy on decency. The last voice at the Gaslight is Dylan’s, whose career went considerable further than Van Ronk’s.