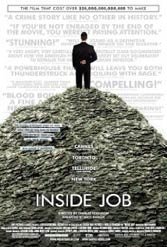 Charles Ferguson’s gripping account of the events leading up to the 2008 subprime Wall Street meltdown is nausea-inducing. He uses five brutal chapters to denounce the ill-fated wave of bad loans and speculative borrowing that triggered the financial crisis. Greed, self-indulgence, amorality and shamelessness are heaped one atop another and laid at the feet of Alpha male, hooker-addicted Manhattan bankers who, emboldened by deregulation and blinded by profit, walked away from link between loans and repayment.

Underlying the crisis story is the idea that the bankers, politicians and economists who ignored storm warnings belonged either directly or peripherally to America’s ruling elite, and still do. For Ferguson (who made the 2007 Iraq war denunciation “No End in Sight”), the culture of bonuses, lobbyists, and institutional conflict-of-interest flourishes because it’s protected by a Washington leadership unwilling to rein in its moneymakers. One analyst calls the 2008 crash a “cardiac arrest of the global system,” but Ferguson’s point is that the contaminated heart was (and is) fed on a diet of insider fries.

In that sense, this is unabashed agitprop that often uses abridged interviews dress up righteous anger, at times mimicking the tactics of those it denounces. Notably missing from the perfect-storm puzzle is a chapter on the effects of the 9/11 terrorist attacks, which abetted the financial bubble in defense of a system that at the time was relentlessly advertised as under terrorist siege.

Matt Damon provides both the j’accuse narration and the idealistic closing remarks. The film won the 2010 Oscar for Best Documentary.