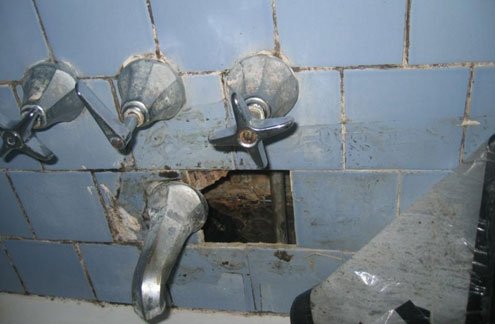 ’d been living in my apartment for a year when it happened. An inondazione. My roommate and I had noticed problems with our bathroom radiator. The heater was something I’d never seen before coming to Italy: a “rail warmer,” a ladder-like contraption attached to the wall that seemed primarily meant for drying towels. An elaborate detail for a bathroom that lacks even a toilet-roll holder. But, of course, it doubled as the bathroom heater. Kind of smart.

Less smart: This heavy, steel monstrosity hadn’t been installed properly. And so I started to notice that, occasionally, the top part would begin arcing out of the wall, like a diver poised for descent. I pushed it back in. Problem solved.

One day, I walked into the bathroom… and the radiator had completely detached. It stuck out from the wall at a sharp 90-degree angle. Water leaked slowly from the bottom. “Uh-oh,” I whispered. I pushed the radiator back up against the wall to reattach it.

Instead, the heater collapsed back into its 90-degree position, hitting my shoulder with a painful thud in the process. And water started shooting out of the now-completely-opened pipes in the wall.

The water was scalding hot. And coming out fast. “Oh, no,” I said aloud, followed by some other things that shouldn’t be reprinted. Three seconds later, the floor was completely soaked.

I had no idea how to stem the flood alone. Or how to turn the heater, and the water, off.

I dialed my landlady. She doesn’t speak English, and, in my panic, my Italian had dried up. “C’e un’ problema con il bagno,” I tried to explain desperately. “La cosa per il riscaldamento è rotto — l’acqua scende, scende… È un’inondazione!” Valentina said she’d call the plumber. I asked her how to turn the heater off. She didn’t sound sure.

I ran out of my apartment. I knocked on my neighbors’ doors. “Aiuto!” I shouted, desperate. It was 2 p.m. on a Monday. Nobody was home.

Back inside, the cascade was so forceful that a large mopping tub filled up in 5 seconds. Luckily, a couple of others had heard me and poked their heads in. While I juggled tubs and tried not to get splashed with scalding water in my bathroom-turned-sauna, they tried to turn the radiator off. Nothing worked.

My phone rang. Valentina had called the plumber. He’d be there… in two hours.

She told me to run down and ask the building manager, a kind of makeshift super, how to turn the system off in the meantime. Surely, he would know. I sprinted across the courtyard, buzzed his apartment. “Chi è?” he asked suspiciously. I quickly explained.

A pause. Then: “It’s not my problem. Go ask your own building manager. He’s in apartment B 4.”

Racing back across the courtyard, up three flights of stairs. Of course he wasn’t home. Valentina called again. “Did the building manager turn it off?” “No,” I said, “he said it wasn’t his problem, and the other manager isn’t home!”

By this point, my roommate and her two friends had returned. They started an assembly line of catching the water in tubs. Twenty minutes later, it was down to a science. And 20 minutes later, the water was still gushing. I could practically see the mold springing gleefully to life on the walls of the windowless bathroom. Elsewhere, our hanging prints were rippling in humid defeat.

That’s when the first manager decided to stop by, finally convinced by Valentina’s calls that it was, in fact, urgent. As soon as he walked in, his face blanched. “But… but… we have to turn it off!” he sputtered in Italian. He started running around frantically, looking in all the same places that we had earlier. “How do you turn it off? Where do you turn it off?”

I buried my head in my hands.

Another half-hour later, we’d found the solution: Turning off the heat for the entire building. After all, the plumber would be here in an hour by 4 p.m. Then we could turn it back on. It was early March, so still necessary.

“I’m going out of town now for a meeting, though, and I won’t be back until tomorrow morning,” the building manager said. “So everyone will have to be without heat until then.”

Another neighbor overheard him. “That’s ridiculous,” he said. “You can’t just leave 50 families without heat for the night.” The manager glowered at him. I could sense the coming words: “That’s not my problem.” Even though you would think it was. “Look,” the neighbor said to me, “just ring my buzzer, and I’ll turn the heating system back on for the building.” The manager begrudgingly handed over the keys.

The plumber came. At about 8 p.m. Since he didn’t have all the parts he needed, he said, he’d have to come back to finish the job tomorrow. By the way, the reason why we couldn’t turn the radiator off, he said, was because the mechanism to do so was broken.

The next morning, I was awoken by angry knocks on the door. The building manager. “Why isn’t the heating back on? There are 50 families that didn’t have heating last night! I’ve been getting angry phone calls all morning!” he shouted in Italian.

I’d had enough. “You weren’t even going to bother to turn it back on until this morning anyway!” I shouted back, still bleary-eyed with sleep. “Che devo fare? The plumber couldn’t finish the job last night. Non è la colpa mia!”

He looked at me for a moment, stunned. And then scurried away, muttering angrily to himself.

It’s been two months since then. The lighting in the bathroom, which fizzled out that week from the dampness, was just fixed two days ago. There are still huge chunks missing in the wall where they had to reinstall a new radiator.

But there hasn’t been another inondazione. Or any need for the building manager. And for that, I couldn’t be more thankful.