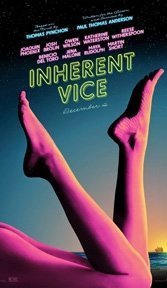 Stoner movies run the risk of drugging themselves out — even those coaxed from novelist Thomas Pynchon’s paranoia-drenched comic imagination. The Coen Brothers’ “The Big Lebowsky” (1998) got a leg-up on subsequent comers with a screwball script whose wacky components actually made sly sense.

No such luck in Paul Thomas Anderson’s uneven adaptation of Pynchon’s 2009 novel about a weed-loving private investigator named “Doc” Sportello (Joaquin Phoenix) who at the height of Charlie Manson madness and the California drug culture (1970) takes up a plea for help from wraithlike ex-girlfriend Shasta Fay Hepworth (Katherine Waterston) and soon finds himself among Nixon-era cops and biker Nazis, hookers and hookahs, faux-Oriental money launderers and sex-crazed dentists, all of while ostensibly on the trail of the suddenly vanished Shasta and her real estate kingpin lover Mickey.

Pynchon has always reveled in an acid-tinted, dark slapstick vision the American national underbelly (“American life was something to be escaped from…”). He makes up weird people, weird places, weird times, and creates a day-to-day impregnated with obsessions — beware hippie horror — in which caricature feels at home. This works on the page, where Pynchon’s wild verbal engineering is peerless.

Too often, though, Anderson’s blind loyalty to the novelist — he’s clearly in Pynchon’s thrall — limits the pace of the movie, as if scenes responded to clumps of clever words rather than venturing out on their own. Even as Doc bumbles toward making sense of the madcap caper, Pynchon’s intended “density and incoherence,” and Anderson’s loyalty to it, keeps the rollicking to a minimum — until the last half-hour, when Anderson & Co. wake from stoned Raymond Chandler-land and actually give the story some pace. There’s some fine work here from Phoenix, the spacey Waterston, manic Martin Short and above all Josh Brolin as Detective Christian “Bigfoot” Bjornsen, one of L.A.’s hippy-hating finest, who effectively acts out his “air of possessed melancholy.” Unfortunately, Pynchon’s pop-culture puns — Sauncho Smilax, Shasta Fay, Agent Flatweed, Petunia Leeway, Rudy Blatnoyd, et al — perish in the manic shuffle.