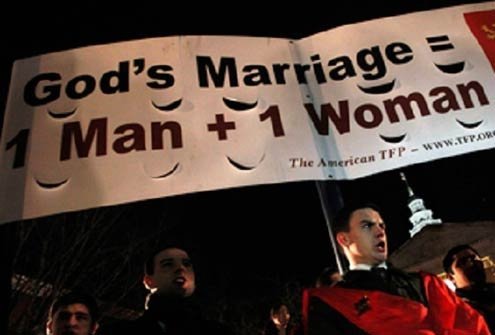 An issue that continues polarizing public opinion.
I

t started with a kiss and then they fell in love. Life’s events and experiences deepened their emotional bond, which ultimately became profound. They then wished to make a lifelong legal commitment to each other. But there was a problem. They were of the same sex. Because of that, much of the world was prejudiced against their union and refused to grant them rights equal to the dignity of their relationship.

That now has changed.

We’ve all heard and witnessed discrimination against gays and lesbians throughout our lifetimes. We know it has existed throughout history, sometimes producing violence. Like the ongoing struggles over immigration, we know intolerance won’t go away. But common perceptions have changed and the legal tide, reflecting sensibilities of the majority, has undeniably turned.

There is now an intuitive understanding, prevalent in western cultures, that we are born with our sexual orientation in place, that gays and lesbians represent a stable portion of the world’s population, that they have lifelong loving and productive relationships equal to heterosexuals. We know these realities have always been so.

Though legal recognition has been slow, it has been relentless, nowhere more evident than here in Europe.

Starting with Denmark’s groundbreaking allowance of registered partnerships for same-sex couples in 1989 to the Netherlands ruling in favor of civil marriage in 2001, the European Union, which forbids discrimination based on sexual orientation, now contains eight of the 11 countries in the world with legalized same-sex marriage. Another 14 EU states permit legalized civil unions or similar forms of recognition.

Echoing the trend, the legal battleground has shifted from basic acceptance of same-sex unions to equal rights. The fight in that arena centers on the definition of marriage.

In Italy, individuals have the right to live together freely, regardless of their sexual orientation. The country’s constitution does not define marriage, thereby leaving its parliament free to legislate in this area.

Italian courts are encouraging lawmakers to take action. In a recent case a Uruguayan man in Reggio Emilia who had married an Italian man in Spain, where same-sex marriage is legal, petitioned for a permit to stay in Italy based on marriage.

The request was initially denied, but after a court challenge he was recognized as possessing a legal right to remain in Italy as the spouse of a European Union citizen, a right protected by a European Directive implemented in Italy. This meant the couple could have a “family life” in Italy. While falling short of recognizing the marriage and granting rights to inheritance and pension benefits, the decision was hailed as another step towards the recognition of same-sex marriage.

In the United States, conservative journalists and commentators alike are beginning to accept same-sex marriage as a fact of life and moving towards discussions of collective strengthening of the institution of marriage. But federal and state governments remain on the defensive, erecting firewalls against same-sex marriage.

The U.S. Constitution, like Italy’s, is silent on the definition of marriage. For that reason, the issue has historically been left to states. Until 1996, when in reaction to a Hawaii Supreme Court decision, Congress passed the federal Defense of Marriage Act (“DOMA”).

In 1993 the Hawaii Supreme Court ruled “…that it might violate the Hawaii constitution to deny marriage licenses to same-sex couples.” Since the U.S. Constitution requires all states to recognize laws passed in each single state, the ruling immediately made federal and state legislatures wary of having to recognize an invasion of same-sex married couples from Hawaii.

In DOMA the federal government defined marriage for purposes of all federal law and its entitlements, thus defining who was eligible to file joint tax returns and receive social security survivor benefits. Section 3 of DOMA states: “… The word ‘marriage’ means only a legal union between one man and one woman as husband and wife…”

DOMA also absolved states from recognizing same-sex marriage made legal in other states.

On May 17, 2001, Massachusetts became the first U.S. state to legalize same-sex marriage. In June 2012, the U.S. Court of Appeals in Boston, taking up a case challenging DOMA, ruled that the law’s denial of federal benefits to same-sex couples was unconstitutional. According to the court, the government failed to demonstrate any “…connection between DOMA’s treatment of same-sex couples and its asserted goal of strengthening the bonds and benefits to society of heterosexual marriage”.

Isolation and detachment are the antithesis of the intimacy we seek as social beings. Yet there are those who would diminish and cast out those who find companionship and love in ways different to themselves. Reflecting this, the Massachusetts Appeals Court stated that “moral disapproval” couldn’t by itself form the grounds for discriminatory legislation”.

The Massachusetts case and a similar one in California are now certain candidates for U.S. Supreme Court review.

Prejudices against same-sex union are deeply ingrained in American society and marriage seen as exclusively heterosexual has fervent advocates. But the protectors of “one-wayness” are slowly being pushed aside by the irreversible evolution of “natural law” and enlightened thought.

Legendary Boston Celtics basketball coach Red Auerbach had the famed habit of lighting up a victory cigar even when the opposing team still had a chance to win. For him, it was game over. Got a match?