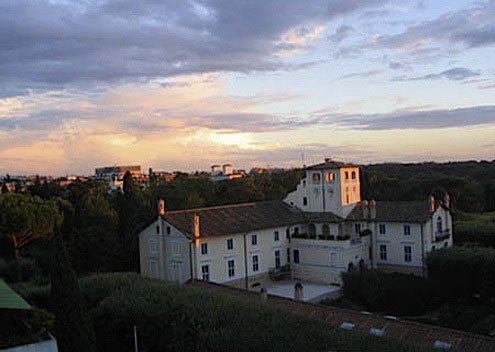 he neighbors have not invited me to my country’s birthday party. All things considered it’s probably good thing.

I’m clumsy with servers and tend to step on the pretty shoes of fragrant women whose quizzical looks send me to remote crannies of the garden where I can get a better look at my beloved apartment whose windows and balconies overlook the grand six acres the neighbors inhabit.

From above I see their lawns and tennis courts, hear monotonous hedge-trimmers at work, glance at kewpie doll figures shuffling and bantering on the fringes of handsome sprawl. I am an unofficial scorer of sorts, accidentally and unobtrusively wedded to the action below.

I remember the big affair of a few springs ago. Dozens of white-laced tables appeared if by magic on grounds near the awning, since removed for repairs. Nifty white-gloved waiters rehearsed antediluvian serving skills directed by a chief attendant who barked and gesticulated to the staff, mostly Asians and Africans. Near him but out of sight an annoyed bandmaster tapped at the membrane of an open mike to ensure he got the right sonic response. By nightfall, the villa was a Florida country club. Why such noisy opulence, I wondered? A great visitor? Perhaps a president?

But no. As the garden got around to tuxedos the occasion took an unexpected turn. My neighbors were celebrating their 50th wedding anniversary and had spent lavishly on their glee. Soon, they were gone.

The new neighbors, who arrived last summer, have been more discreet, and the receptions few. Once, last fall, a blues musician played his electric guitar so vibrantly that small children assembled on another rooftop to probe the intriguing noise with big eyes. Another time, the members of a local club visited and my neighbor made a speech about the significance of friendship and the importance of solidarity among Americans. He’s an eloquent man.

And since he is, I begged his office for a little time to chat, an interview: neighbors are neighbors, after all. He knows Italy — his family is of Italian origin, he lived here in the 1970s, he’s luxuriously good with the language. To some extent our past overlaps.

No, I was told. He was too busy. Try again later. I did. No answer. No surprise, either, because the failure to respond to a query is no longer either a breach of civil dignity or a breakdown in social protocol. An imprecise society — “cool” is the moniker — adheres to the casual. It does what it feels like, not what it should or what’s right. It makes for a state of permanent adolescence and mischief, and many unanswered messages. But that’s another story.

In the late 1970s and 80s, when I ran English-language publications in Rome, my neighbors were more involved. One wrote a gracious note to my newspaper praising its enterprise. Undertakings by Americans abroad deserved support as a celebration of citizenship. At the same time, he also sent a letter to the editor complaining about an editorial. It was healthy exchange.

His successor, a Republican, was nothing short of a cheerleader. He told Italian businesses of the paper’s intrinsic value. As an independent project vying for survival in a tough foreign market, it was an example they could learn from. Very American, he observed.

In those days I visited often with the neighbors and attended Fourth of July parties regularly, always careful not to step on women’s feet, lolling into the trimmed underbrush to stare up and away.

It’s not easy when your neighbor is a U.S. ambassador. Some Romans, whose enduring primitivism depends on form and façade, assume you’re a neighbor because you’re a citizen. Isn’t my apartment owned by the government, ask some? Isn’t my magazine financed by the CIA?

No, I answer wearily. Those days — romanticized to start with — are long gone. True, in the 1950s, U.S. agencies funneled cash to American media overseas, but usually as part of assistance to Italian political parties seen as supportive of America’s Cold War priorities. Now, the details of anti-terrorism aside, diplomacy is largely ancillary to business. An ambassador is a salesman in a diplomatic jumpsuit.

It’s something I struggle to explain to perplexed Romans when they ask to know the details of my exclusion, thinking it a snub. “We are not a country of favoritism or obligations,” I tell them.

But wait a minute, some persist: are you not a U.S. citizen? Are you not running a magazine called “The American,” which is at least in part for Americans? Are you not as least as experienced as your peers? If your neighbor was once a good neighbor, why no longer? Should you not be present, even as an independent man, in the family fold of the Fourth of July? What has changed? Have you done something wrong? Are you disliked?

I don’t think so, I say tentatively. The parties these days are smaller, budgets are tiny, extravagance rare. American festivities are ironically meant not for Americans but Italians. A big party, like a debutante ball, is a tease for insiders. Eccentrics need not knock.

Still, I miss my neighbor, not so much his person but his spirit.

The American dream — to me, a counterculture Eagle Scout — involved ambition, good cheer, and shared encouragement, which together shaped optimism. Hope was always a handshake away, a value unique to the original landscape. Political debate was a rite of informed citizenship. One ark contained all Americans abroad. For years, my privileged neighbor reminded me of this with a symbolic wave from time to time, as if to acknowledge our improbable but necessary kinship.

Now, here as in the United States, it’s every neighbor for himself, a dominion of disengaged self-interest, diplomacy carved from too-few lifeboats, cut loose and adrift.