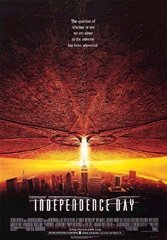 Once in a while silliness can flatter the absurd long enough to make you smile. Take Roland Emmerich’s Aliens-all-around movie. It serves cliché for breakfast, lunch, and dinner and remains, well, tasty. Big bad saucers appear out of nowhere, darkening the sky. A put-upon former fighter pilot white president (Bill Pullman) and witty black aviator (Will Smith) must save the day (assisted by a nerdy Jewish scientist and his wisecracking father, Jeff Goldblum and Judd Hirsch respectively). There’s Saturday Matinee satire at the center of the film. No one’s for real (except maybe Smith). That said, the saucers look awfully sinister and the for once the aliens mostly stick to their ships. The end of the world is averted (again) mocking panache.