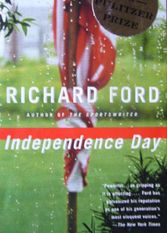 Deep into Ford’s second Frank Bascombe saga, the now mid-40-something narrator sees parachute jumpers as part of Independence Day festivities. It is, he says, “a bright and chancy spectacle” that “enhances the day’s modest storage of fun. More of this would be better all around, even at the risk of someone’s chute not opening.” And there it is, the non-casual kernel that defines what Ford calls Bascombe’s Existence Period, bright and chancy and always at risk of something going desperately wrong. Melancholy is progress defending itself against the future. And Ford’s own progress, from Bascombe’s luminous introduction in “The Sports Writer” to this, life’s mid-section, is tantamount to the difference between Apollo 8 and 11 — one circled the moon at Christmas while the other landed in summer. This is a literary moon landing.

Ford’s Haddam, New Jersey antihero (or “Homo haddamus pithecarious”) is now divorced (his remarried wife gets a name, Ann), has a new girlfriend named Sally, and sells real estate to dolts. Son Paul, who lives with Ann, talks in riddles, barks at will, and steps in front of baseballs at the least opportune of times. Frank trawls through the Existence Period (an image of his own making, like a “crippled hitchhiker in a snowstorm”) trying to convince himself of the merits of self-reliance. Ford has a surer hand on Bascombe now. And it’s often terrifically sad.

Ford critics will always lambaste him not as cynical but as gloomy. This is understandable since Frank is a friend to all that’s passive but his voice. You love someone, he announces, “by trying it without the don’t in front of the verb,” the “it” being the declaration, “I love you.” Ford’s true love is his patience with Bascombe, a 1988 Democrat you know will be disappointed. Independence Day, both day and the novel, is occasion for Frank’s frank summation of his feelings about those around him, who are the world: ex-wife, son and daughter, wan lover, edgy business partner, and a slew of suburban archetypes that serve Ford handsomely in reminding us that no man is an island for very long, even if warm currents do him favors.

If we drift too far toward “island-dom,” something or other — a barking son, a murder, a parachute that won’t open — drives us back into the clutches of society, and altruism. This is an important novel because it’s demandingly social; it’s about Frank’s people, his tribe, and his race. At times, Ford’s prescience is eerie, as when Frank peers at New York City to the east: “Gotham shone like a temple set to fire by infidels.” The Existence Period is Frank’s gut-check. He passes. Now, on to permanence.