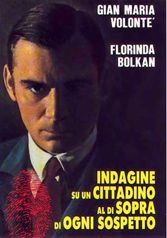 Well ahead of its time as a study of power wrapped in a sex crime. “Basic Instinct,” to name just one, owes this movie an indirect debt. Upstanding police inspector Gian Maria Volonté murders his sadomasochistic mistress just before he receives a promotion. He then dares his successor to discover him by planting clues. He misdirects and redirects in a show of sexual and political dominance. Volonté is larger-than-life throughout. While director Elio Petri inserts ideological rants to go with the period’s anti-Fascist snarl, “Indagine” is first and foremost a thriller.