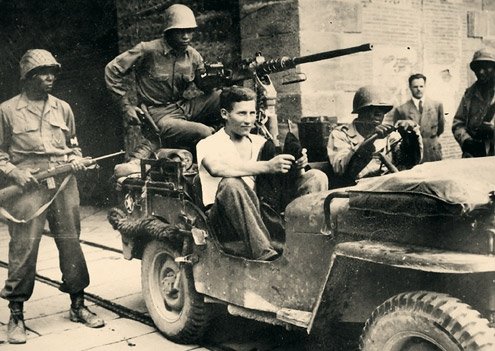 Race played little role in the interaction between black World War II troops and their allies, and adversaries.
I

n World War II, numbers of Buffalo Soldiers — black American infantry — served in both north and south Italy. By all accounts they were treated with dignity. Race may have been a curiosity but not a distraction. Moreover, these black men wore friendly uniforms and fought on behalf of the saviors, a non-Teutonic side whose methods and choices went unquestioned. Few wartime Italians, their own human rights modest, knew about the state of civil rights in the United States. The purpose of the GI presence, to liberate Italy from Fascist and Nazi rule, superseded the mysteries of skin color.

Italy’s quarrel with race (and ethnicity) developed later, in line with a gradual increase in the immigrant population. Waves of Filipinos settled in the country in the 1960s, most becoming household workers who replaced an increasingly middle class population less and less inclined to menial work. They were tolerated but unloved. Class distinctions and pseudo-segregation, as well as Filipino closeness to Catholicism, deflated objection. The Filipinos knew their place.

Even a half-a-century ago many of the newly-arrived Filipino recognized Italian resistance to that which was foreign, and therefore odd, reflecting the view of a largely inbred and sheltered citizenry that, over time, had set aside its own eagerness to become foreign — first in North American and later in West Germany. Some Italians seemed (and seem) unable to connect their mass departure for imagined greener pasture to the arrival of non-Italians into Italy seeking the same.

Largely white Italy is implacably and viscerally divided between north and south — an amicable whole only when the national soccer team wins. It embraces its in-house geographical and cultural divide while struggling to fathom anything more complex.

Northerners can call Southerners ignorant and malodorous, with Southerners responding in mocking kind, but the feud remains in the (white) family. If, however, the appearance and demeanor of outsiders fit Italian stereotypes, there’s a far better chance of eventual if grudging social incorporation (a winnowing process familiar to Eastern European arrivals, with Albanians getting the shoddiest treatment since they were once under Italy’s Fascist thumb, with Benito Mussolini lastingly labeling Albania a country of bandits.)

But blackness pushes an entirely different button, since many Italians, highly visual, are quick to irrationally regard that which doesn’t fit as a nemisis, not only to jobs but also to a subcutaneous, rarely-spoken sense of Italian Aryan-ness. Black faces began making a significant appearance in Italy only in the 1980s, when troubled north and central African populations began toiling northward. With them came Asians, mostly from the Indian subcontinent.

Unlike colonial powers England and France, and Spain (occupied for centuries by Moors), Italy lacked familiarity with non-whiteness. Its “racial” divide involved feudalism and social class, not competing skin color. Italy’s post-independence period failed to transform constitutional rhetoric into meaningful national egalitarianism — which the U.S. did in the wake of its Civil War. Italy’s historical conscience was made aloof from and resistant to blending in, no help from 20th-century parish priests, demagogues and tradition-bound underworld organizations. Though renowned for their human compassion, born from centuries of poverty, Italians were ill-equipped to cope with dramatic changes brought about first by the postwar and later by the collapse of communism.

Italy’s most bigoted politicians are typically middle aged. The fairest are generally younger. Those who see beyond skin-color tend to come from families whose parents always preached the worth of human equality, ignoring social convention and local gossip.

While former colonial states have transformed immigration and race relations into front-burner issues, anti-multi-ethic Italy has tended to deflect the focus, as if global confluence didn’t become it, or shouldn’t. Racist sniggering has long been included in provincial banter. “Color” is still a means of differentiation in newspaper prose. Some businessmen are still awash in the mocking language of their youth. Blacks are off-handedly referred to “house boys,” “negroes,” and “people of color.” The tone is often mischievous and defensive, as if to reiterate the existence of an unspoken natural filter. The slow-to-change Vatican until recently resisted sending black priests into the local field.

As a result, Italian social progress is slow and often superficial. Though it can boast token advances — a popular black soccer player and, now, its first black minister — some of the national undertow remains bewildered by the significance of racial change, as it is by the potential of the Internet.

Though many are the open-minded and progressive exceptions, they can seem at times like little more than a polished avant-garde. No cultural suppleness sustains them.

As a result, Italy remains an “incidentally” racist country, albeit among the least actively malicious on the planet. It most resists that which it can’t fully recognize. Paradoxically, it sets aside the planet’s one constant, change.