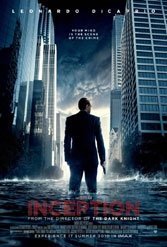 For a movie about the landscape of dreams, Christopher Nolan’s latest effort is conventional to the core. One part is a kinetic thriller tailored to therapy-oriented times, another a paraphrasing of old school bank heist lore. Dial down the fanfare and you’re left with the story of a man who feels responsible for the suicide death of his wife and wants more than anything else to be reunited with his children.

That man is corporate spy Cobb (Leonardo DiCaprio), an “extractor” of secrets. He inserts himself into trick dreams he’s implanted into the minds of rivals. When one such extraction goes south, Cobb finds himself at the mercy of Japanese businessman and would-be victim Saito (Ken Wantanabe). To balance the slate, Saito makes him an offer: Undertake a so-called “inception,” the implanting of an idea into an impressionable rival’s head, and Cobb will be pardoned and allowed to return to his “real” life, beloved kids included.

Nolan uses this story line to build a narrative with “Raiders of the Lost Ark” pacing (DiCaprio’s dourness mimics Harrison Ford). Most of the imagery, meanwhile, owes a debt to the likes of “AI,” “Vanilla Sky,” and “The Matrix.” The action sequences are pure old school 007.

Ostensibly, Nolan wants to plumb layers of self and the represent the unconscious mind as an architectural maze (“An idea is like a virus,” says Cobb). In fact, the film is a collage of fairly standard action sequences that track Cobb’s IM-style Team as it burrows deep into the thoughts of a billionaire heir whose ambitions Saito wants to redirect. As Cobb’s group generate Magritte-like dreamscapes, Cobb is besieged by memories of his wife. Soon, a key member of his literal dream team, Paris student Ariadne (a miscast Ellen Page), begins doubting his ability to distinguish between reality and projection.

While the bastardizing of Jung makes for a scenic journey, it’s anything but a long, strange trip. When push comes to shove, and it does constantly, this is a sci-fi flick with visionary intentions that never pan out. Even the kicker is predictable. Windmills of the mind aside, the action flick velocity leaves nothing and no one to believe in, part of the reason Nolan leans so heavily on the Dad, kids and dead wife motif. Nowhere is the Dark Knight’s sultry murk. Instead, Nolan’s has big red crayons which his uses to draw mostly straight lines, leaving awe to fend for itself.