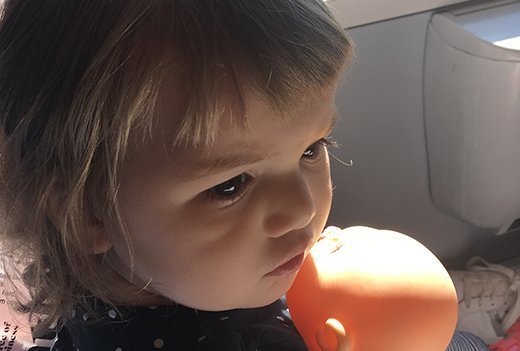 Julia goes to Italy, and Italy applauds…
B

ack to Monza! my toddler screamed, throwing herself on the ground. Monza was the sedate city, just north of Milan, where we’d spent the first part of our 10-day trip to Italy. Her melt-down came on our last day in Rome, when we still had one more friend to see.

I’d spent a half hour trying to hail a taxi between Piazza Santa Maria Maggiore and Piazza Vittorio, not the quietest part of town. Cars and scooters buzzed around me, with the occasional tram trundling through. I managed to get the attention of one taxi driver.

“Grazie,” I said, exasperated. “Un attimo che prendo il passaggino,” I added, asking him to wait while I grabbed the stroller. But when I turned back around, stroller in one hand, Julia in the other, the taxi was gone.

As Julia’s cries intensified, I scooped her up, taking her straight up to the room where we were staying, the guest quarters of a friend’s apartment. Within minutes, she collapsed on me, Pietà-style, and slept for three hours.

That my Italy largely became Julia’s is an ode to the endearing self-absorption of a toddler.

Though I was apprehensive about taking a small child to Italy, I wanted make the trip before she turned two, since kids travel free until then. Julia was in my womb the last time I’d been to Italy, so it felt natural to take her there.

She had plenty of cute moments: she was called polpettone (little meatball) and bella bambina, and met some Italian children, like the little boy who offered her a popsicle. She also picked up some Italian: ciao, scusa, questa, and buongiorno, which she says with suitable gusto.

My trip to Italy soon became Julia’s: she was fawned on and photographed. In fact, almost all the trip pictures are of Julia. I make a cameo appearance in one selfie of us together, on a train platform, after the first train broke down and we had to take three more to get to our destination. Needless to say, I don’t look as happy in the picture as she does.

That Julia made the trip her own is perhaps an ode to the endearing (and maddening) self-absorption of a toddler. My role, or so it seemed, was to keep her safe and happy. I was also paying close attention to Italian child-rearing traditions, especially those that might differ from American methods.

A book I’ve been reading, Pamela Druckerman’s “Bringing Up Bébé,” notes the differences between a French and American upbringing. In France, daycare is state subsidized, and praised for the way it introduces kids to social interaction. There’s less emphasis on developing skills, reading, say, than on encouraging children to play and express their creativity. There are also sharper boundaries between adults and children. Kids in France begin sleeping alone through the night at two months. Julia and I are still co-sleeping, and rarely through the night.

French fairy tales don’t always end happily, a detail that caught my attention. They are more reflective of real life. “He loves me, he loves me not,” a quote by writer Debra Ollivier in the book, becomes “he loves me a little, a lot, passionately, or not at all.”

A book pointed out that French fairy tales don’t always end happily, a detail that caught my attention.

A teacher I met in Monza said this also applies to Italian fairy tales, and that sunk in the day Julia and I took a kids’ train ride through Monza’s big park. The driver warned us to sit in back so we wouldn’t inhale fumes. He drove the train, a few attached wagons, more like Italians drive their cars — causing Julia to cling to me. This was very different from the toy train ride at our local Florida mall, where the train makes the same slow, boring loop over shiny floors.

At a certain point, the driver stopped in front of a little café nestled inside the park. The pause was long enough for me to get a whiff of sweet pastry, which always reminds me of my own post-adolescent journey in Italy, a fairy tale with a bittersweet ending. I didn’t come away with a prince but I did make enduring friendships.

In the midst of my revelry, the driver lurched forward, carrying us into the heart of the palatial park, where we saw a bit of everything: historic buildings, horses, Carabinieri, dogs, joggers, elderly men playing bocce, and young people kissing. We also saw some people just like us, since our wagon was attached to another one that contained a mother, her little boy, and newborn baby. They faced us, so we gestured back and forth. Julia relaxed, enjoying the wild ride in proximity to her peers.

Unlike real trains, with their loud Hollywood-style sound effects, the park train had none — only the little boy shouting, “choo choo!” every time we turned a corner.