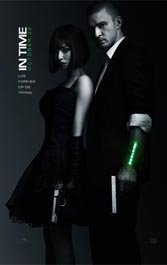 Niccol’s cleverly designed film carries the time-is-money bromide to its logical extreme. In a futuristic state, 25 years is the allowed lifespan with citizen willing to do whatever necessary to prolong the digital clock embedded in their forearms. Tolls are time. Hotel rooms are time. The cost of living itself is time, which the wealthy stockpile. The clock works against those who don’t have it. People collapse in the street. There’s no aging, only “expiration,” which some see as an act of nobility but immortals seek to buy away.

Fertile stuff, if only Niccol didn’t let convention bog down his riff. The basics: Will Salas (Justin Timberlake) lives in Dayton, his own time running out. But not as fast as that of his mother (Olivia Wilde), who, like all the movie’s other women, looks like his girlfriend. When Will gets the gift of a century from a centenarian stranger (who of course looks 30) his first priority is to save mom’s life. But the clock conspires against him, which ushers in a vendetta, played out in glitzy Greenwich, Conn, the capital (appropriately) of time. Up against him are Matrix-like government agents, “Time Keepers,” hunting down missing time like bank-heist cash.

Niccol clearly enjoys all the cleverness and double-entendres (a sexy waitress, apparently mindful of movie history, tells Will a snack will cost him a Fellini-like eight-and-a-half weeks; a high-stakes gambler, impressed by Will’s assets, says he “must come from time…”). But in the end, the script’s potential gets stuck in a rut. Will hits the road with a “let’s change the world” rich girl whose time-hoarding father becomes an Orwellian bad guy. Silly’s the word.

A precursor to Niccol’s spin was Michael Anderson’s 1974 “Logan’s Run,” in which all die at age 30 to cut down on overpopulation. That quirky film at least broke free of most one-track moorings, which Niccol’s does not.