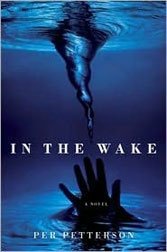 By Per Petterson, translated from the Norwegian by Ann Borne

By his own definition, 43-year-old writer Arvid Jensen (a lover of Alice Munro) is a walking “whited sepulchre,” a jobless sliver of a man roaming in around dark Oslo in his scuffed but trusty Mazda haunted by bits and pieces of a shattered past dominated by his impressive father. Arvid is estranged from his wife and two daughters; his brother, whose on wife intends to leave him, has just attempted suicide.

Why the unwavering sullenness? Call it survivor guilt. Six years before, Arvid’s father, mother, and two youngest brothers died in an Easter blaze on an Oslo-to-Denmark ferry (based on the 1990 “Scandinavian Star” disaster). Arvid should have been gone along on the trip but, never the reliable one, opted out on a whim. Since then, he’s been in an existential tail-spin: “I have been on my way for a long time, and now I am there. At rock bottom.” He’s owned by the past alone and his days are a “milky-white soup in which everything flows silently as in a sleepwalker’s dream.” Yes, he has an affair, and yes, he looks after his brother, but these, too, are the acts of a sleepwalker. Only a Kurdish refugee who speaks no Norwegian and lives in his building hears his innermost confession: that it has taken him six years “to realize it’s unbearable,” namely the loss and the memories.

In the wake this is, the wake made by water, the wake that comes after death. Petterson strips otherwise strong men, both fathers and sons, to the bare-knuckled bone. “We were on our way to the bottom, but we did not see that,” Arvid says of his gradual distancing from his father, a distance he can no longer bridge. What matters here is not redemption but confession, and it’s a haunting melody that Petterson knows to convey outside grand grammar, instead forging a muted Scandinavian howl that leaves memorable scars.