In the Valley of the Kings 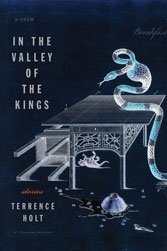 Terrence Holt's debut collection of stories shakes the foundation of the word.

If literature professor-turned-medical doctor Terrence Holt never again publishes fiction, these eight hallucinogenic musings will endure to distinguish him. In his time-warping tales, scrolls, plagues and planets speak. So does a tungsten robot assembled from the remains of crippled man (“In the hollow that is most of me, the heavy elements of my refining linger.”) And a space corpse marooned amid the leftovers of a revival project gone wrong (…”some things are never coming back. One of them is me.”) All around, claustrophobic narrators forage through the elliptical detritus of a timeless future-past in which words are mysterious, toxic, elusive. Sentences are grief-stricken lullabies within science fiction canticles. Ice and odors are constants. Hexes seek a home.

Holt’s grasp of imaginative realms, earthbound and alien, is outside genre, as is his eagerness to return repeatedly to the meaning of expression itself. He plays reporter, astronaut and Egyptologist with equal aplomb, perhaps because his narrators are forever in the thrall of why words are, or are not. “Words have only this power: they keep me here,” says the speaker in “Eurdyke,” a man (or is he?) marooned on a far-away planet. “I make an offering of myself to them.”

But even such offerings often fail to penetrate life’s encryption, leaving behind humbled humans sick or dying and ripe with admonishments: “Trace the chimera Reason to its den, and the ground collapses at your feet,” says the professor of the dominant title story, a long (and at times overwrought) musing on a tomb’s power. In “Apocalypse,” a clock with “oddly susurrant ticking” is at one with pulse.

Holt’s interdisciplinary stories are the last will and testament of condemned loners trapped between perception and psychosis. He uncannily makes worlds where such characters can thrive. His prose — “frictionless as dreams” — transforms their conspiracies into weird nectar.