In the Shadows (The Specialist) 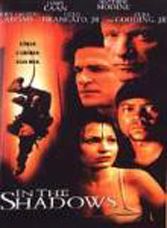 Stuntman-turned-director Ric Roman Waugh can thank his lucky stars for having enlisting Matthew Modine and James Caan: They jolt his patchy project to life. Hit man Eric (Modine) is sent to murder director and stuntman Lance Huston (Caan) but gets oddly wrapped up with his daughter Clarissa (Joey Lauren Adams). Eric then becomes involved in stunts, which changes how he looks at violence. This is a quirk-rich noir that siphons energy from the facial ravines of Modine and Caan. Modine’s android demeanor suits a script that works to hide feelings until the last second. Modine has seldom found homes in mainstream Hollywood despite his stirring presence in “Birdy” and “Platoon.” It’s too bad because he’s a rangy and upright. (Amazingly, even Cuba Gooding Jr. makes an appearance.) Renamed “The Specialist” for video release.