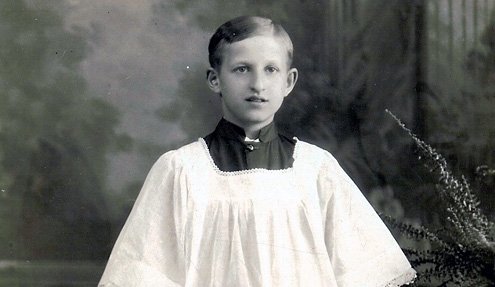 “Are any of the other altar boys here yet?” he asked.

“You better go in there. It looks like a lot of people are already here.”

He stepped out of the car and into the water in the gutter, splashing muddy streaks on the cuffs of his Dockers. He turned around, an uneasy boy of eleven years.

He shut the door, and his father motioned with his hand.

It had rained the night before and ground was still wet. Soggy leaves were matted to the path up the rectory steps, and the boy listened to his shoes against the wet concrete.

When he reached the top of the steps, the boy pulled open the heavy door and stepped into the warm air inside. The lobby was dull and empty, except for a woman who sat at a desk.

“I’m an altar boy,” the boy said. He mumbled and looked at his feet, standing with his hands in his pockets and his back against the door.

The woman said everyone was waiting in the study.

“Do you want me to take you there?”

She led him out of the foyer and down a long dark hall. At the end, there was an open door, and as they walked, the boy watched it, trying to listen to the garble of strange, unseen voices inside.

“Are any of the other altar boys here yet?” he asked.

“Not yet, you’re the first. Do you want to wait for them up front?”

“Okay, well make yourself at home and help yourself to whatever you like.”

She left him at the entrance, and he stood there for a moment with his hands still in his pockets until he finally went in.

The room was wide and dark, with wood paneled walls and bookcases, a brown leather sofa and chair, and thick, maroon curtains, which made the air feel still and dusty. The priests stood around the room, balancing their cups and sweets, talking in hushed, excited voices. No one noticed the boy carefully stepping around the room to the table with the coffee and cakes. Although he had only tasted coffee once from his father’s mug, he placed a porcelain cup on a saucer and lowered it under the spout of a large silver coffee urn. The cup rattled on the saucer as it filled with the hot black liquid.

The boy moved to a corner in the back of the room, holding the cup with two hands. The priests were listening to Fr. Peter complain about managing the parish’s capital fundraising campaign with only the help of that incompetent, though unquestionably pious woman, who held the title of parish administrator. The boy caught himself staring, and turned to look at the books that lined one of the parlor walls. All the spines were the old blue and brown leather kind with imbedded gold lettering.

He pretended to browse leisurely among the titles when Fr. Peter came up behind him.

The boy looked older than he was in his tight blue blazer, white shirt and tie, clutching the cup and saucer with his two hands.

“You are already drinking coffee,” the priest said and smiled.

The boy didn’t know what to say.

“Have you paid your respects to father yet?”

“No. I thought I was waiting for the other boys.”

“Well, you don’t need to wait for the – unless you want to.”

Fr. Peter led the boy back down the long hallway to a room on the other side of the house. The room was lined with tall windows and the sunlight was so bright the boy squinted as he entered. All the furniture had been removed expect for a sofa that was pushed up against the wall. Two very old women sat on the sofa with black shawls pulled down around their necks. After taking one step into the room Fr. Peter stopped and the boy’s hands returned to his pockets, his eyes studying the dried mud on the top of his shoe. He could still hear the priests at the other end of the house and he felt for a moment like he was in his pajamas, leaning over the top of the staircase at home, listening to the muffled sounds of one of his parents’ parties. He felt Fr. Peter’s finger press into his back, and he knew to move forward to a spot before the long, black casket in front of the windows.

All morning he had wondered what a dead person would look like, and now that one was lying in front of him, he couldn’t find the courage to raise his eyes to greet the man. The boy found the kneeler, knelt down, folded his hands, and tried to recite the first few words of a Hail Mary. With his head bowed in front of the dead man, his eyes began their journey, from his knuckles, to the side of the casket, to the silk cushioning that lined the rim, moving further up with each line of the prayer. Finally, he could see two limp, white hands resting on a black suit coat with a rosary strung between the fingers. The priest’s face was pinkish and swollen, and the boy was surprised at how clean it looked. The swelling flattened out the wrinkles in the priest’s skin, and he looked much younger than he did two Sundays before. The boy kept telling himself that this person in front of him was dead.

The man was still — so completely still. Two Sunday’s earlier the boy was holding his breath as this man lifted the chalice, struggling to contain the Parkinson’s that shook him. The priest’s head bobbed and shook. He wrestled his hands, his frightened eyes fixed on the rim of the cup, helpless, waiting for a drop to fall from the brim. Now, there were those hands. They were so still. So unbearably still.