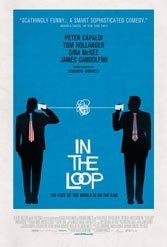 An innocuously inept British government minister Simon Foster (Tom Hollandar) makes an loony-tunes TV comment about war in the Middle East (it’s “unforeseeable,” he gulps) provoking a chain of absurd misunderstandings that churn from the Foreign Office to Foggy Bottom and back.

Scottish director Armando Ianucci’s screwball satire takes its cue from Secretary of State Colin Powell’s now infamous UN pre-Iraq invasion lecture and finds a home in caricature. Best of those who dish it out is Malcolm Tucker (Peter Capaldi) as the British (nay, Scottish) government press spokesman, whose foul mouth and fouler antics seize the movie by the throat and clutch hard (to the pocket-sized Foster, after an impromptu interview: “You sounded like a Nazi Julie Andrews!”)

But Ianucci is undone by the limits of his gag, namely a naïve minister run amok among amoral insiders and goofy aides. Once the manic energy fades, the movie turns into a skit-thin denouncement of bureaucratic haplessness intended to evoke much-maligned Tony Blair’s deference to George Bush in 2003. That’s no surprise since Iannucci and his BBC cohorts are one-hour sitcom specialists.