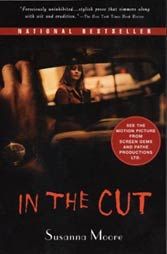 “In the Cut” eventually yielded a dishonest film adaptation, which kept Frannie (Meg Ryan) among the living. The novel refuses such facile conclusions.