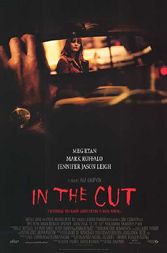 What was Jane Campion thinking? Campion (“The Piano”) is an astute judge of character and Suzanne Moore’s brazen but subtle serial killer novel would seem to suit her gifts. Not this time. Everything here is too neatly packed. New York City English teacher Frannie Avery (Meg Ryan subbing for Nicole Kidman, who begged out) falls for a detective (Malloy, Mark Ruffalo) who’s investigating a gruesome killing. She’s attracted into his erotic, claustrophobic world (“in the cut” is sexually-charged phrase: “In the cut. From vagina. A place to hide,” writes Moore.) As crimes pile up and coincidences produce paranoia, Frannie starts suspecting Malloy, complicating their white-collar/blue-collar affair. Then, Frannie’s sexuall promiscuous half-sister Pauline (Jennifer Jason-Leigh) is murdered.

Neither Ryan nor Ruffalo wake to their roles. The reason is part-Hollywood and part-Campion. Moore takes risks with Frannie because she’s doesn’t intend to rescue her. She smells her own blood-pool as Moore’s ends the novel. Campion intends to save Frannie, and that blows up the story’s central conceit.