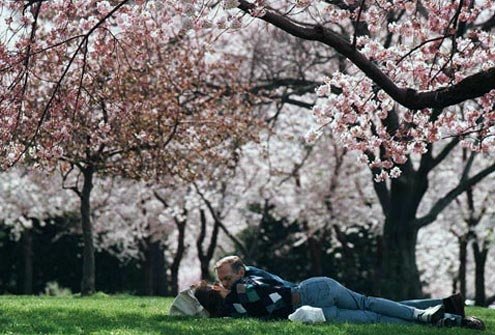 Her best friend had invited her to see the Cherry Blossoms at their peak.
T

here’s something about spring. Every cliché rings true. Bulbs and buds pop their heads from frozen and defrosted earth with enviable resilience. Just when you thought winter would last forever, resigned to heavy coats and long nights alone under the comforter, something, or someone, springs up.

In Kyla’s case, everything sprouted at once.

Like watermelon seeds casually cast into the garden in August only to yield — to your surprise and pleasure — an electric green curlicue of new life the following April.

Her long-time lover, Dave, whom she’d written off for months, reappeared in a one-line email. He missed her, or rather, missed doing something to her. She shared his sentiments but took her time responding. He’d withered in winter without a word. He could work for it, and besides, she was busy with work and couldn’t even fathom the ins and outs of a rendezvous. Even the thought of it made her pause to exhale a few times. She could still feel his hands on her hips.

The following Monday she sat at her desk assessing the week ahead when she heard the telltale ping of an instant message. It was the local neighborhood boy who had disappeared right around New Years with the usual excuse of needing to figure some things out (most likely the girl he’d woken up with on January first…). The messages appeared in rapid succession — first a cautious salutation, followed by a round of fuzzy apologies, and finally he cast his rod in the hopes that they might share a picnic in the garden with the weather got warmer.

She was pleased to know he’d come back around —but really — he’d vanished once. What was to say that he wouldn’t do it again? She replied with a “We’ll see” and a semi-colon wink. He could wait. She was holding out for something fresh.

Two days later she met up for an afternoon with an old acquaintance from her former office. They’d stayed in peripheral contact, and she’d always found him adorable. Nothing had happened. She’d done her share of research and was fairly certain he was attached. He announced that he was joining a division of her current company and that he was thrilled that they’d be working together again! And when might they have dinner.

She’d known him for nearly four years and he’d never once exuded the minimum interest. She checked him out online when she got him. There were no more woman in his profile pictures.

She said yes, but sent him home before midnight. Something still felt too perennial, as if he’d known she would always be there and was simply waiting for a convenient time to make things bloom. That said, his red hair and sparkling blue-grey eyes were terribly hard to resist. A part of her wondered why she ought to. He was a delicious little treat, but maybe he’d come back around for a reason. She put things on hold and kept him in the back of her mind. The anticipation of him kept her hands and thoughts occupied one Sunday for several hours.

Then there was Evan. A year ago she’d met him online while searching for a blind date in Washington, D.C. They’d never met — only stayed in touch. Her best friend had invited her to see the Cherry Blossoms at their peak. She took a chance and decided to do some popping up of her own.

She purchased a pale pink and black set of lingerie and snapped a few pictures of herself. Winter hadn’t been too harsh on her midsection, and her waist still nipped in with round ripples of dedicated abdominal work. She looked strong but soft. She pressed send.

The following weekend she boarded a bus. Four hours later they were face to face at a café overlooking East Potomac Park. The trees appeared as if swathed in cotton candy. He was shorter than she’d imagined, but compact with a shock of dark blond hair handing low on his brow. When they reached to clink wine glasses, their fingertips touched just slightly and she felt the zing of new life.

They spent the weekend together hiking through the park and stopping under pink and while clouds to kiss and press their bodies close. They both agreed that spring was worth waiting for.