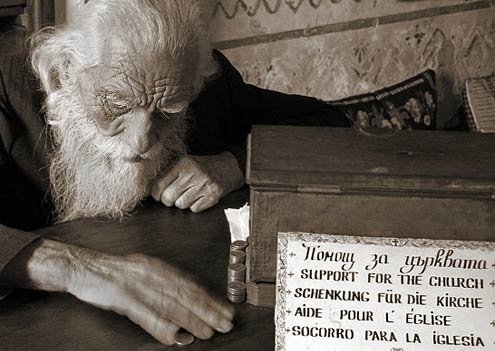 Part describing as well as prescribing.
I

recently had a scientist friend of mine stay at my place in London. Previously non-religious, she converted to Christianity about a year ago. I found it fascinating that a woman so in tune with scientific truths would feel the need to turn to religion to better understand life.

The concepts of salvation, eternal life, and the need to fear God have never gone over well with me. But nor does the concept of believing in nothing. Which has led me to consider a compromise between believing in the totality of what holy books preach — the Bible, Torah, Koran, and others — and ignoring them entirely.

But where to start?

This was something that my friend and I hotly debating one clear-skied London night. We discussed how we had each come differently to religion, and the effect it had on both of us. I was born to a Catholic father and Protestant mother, followed the standard rituals of the Catholic faith, was baptized in a Catholic church, did my holy communion in Rome at age six, and was confirmed in Copenhagen, where I lived at the time, at age 13. For my Italian family, these traditions signified an understanding, and a commitment, to Catholicism.

But as a young girl, and later as a teenager, these religious traditions and rituals felt largely ceremonial. I enjoyed the sense of togetherness provided by community and family but never forced myself to delve deeper into the meanings of the lessons I was learning, the religious texts I was told to memorize, and the rituals I was performing.

Perhaps this it was youth distraction. Religious training was something expected of me. It went unquestioned. In my family, everyone had done it, so why wouldn’t I?

My friend had a dramatically different relationship with faith, and it showed in the way she spoke about it. Growing up, her family wasn’t at all religious. Coming from a country that only recently obtained independence, the idea of adhering to a particular religion was taboo. Religion was perceived as backward thinking, and had no place in a country that was just finding itself moving forward after years of oppression.

Yet the absence of a belief system satisfied her only until 19, when she started thinking that there had to be something more to the human order. She decided to inform herself on her own terms, reading books on Christianity and slowly beginning to attend church, gradually immersing herself in a whole new world. She was shocked, she told me, to find church people so normal. She’d expected to find the backward-thinking people her training associated with religion and its doctrines. Instead, Sunday Mass produced successful lawyers and doctors, and, most importantly, scientists — lots of them. Here were professionals who spent their days and weeks studying the intricacies of the human body, of the earth, and of pure physics, putting their faith in God.

And now she does too.

Sitting there that night, I thought about media scaremongering when it comes to portrayals of the deeply religious, and how the tactic, overt or implicit, really worked. Here we were, admitting to each other that we had secretly viewed religious people as abnormal, when in fact they were entirely normal, had interesting jobs, were fascinated by things the same things we were, but lo and behold, went to church on Sunday.

As a teenager, I remember my mother always telling us that we’d all find a way to understand what religion meant to us over time. I think what she meant was that spiritual contemplation comes with the life experiences that maturing affords.

I remain skeptical about Christianity, a feeling I expect will endure. My journey into understanding the nature of faith has only just begun. I still struggle to accept specific Christian concepts that my friend has wholeheartedly embraced. I find it hard to accept with what Julian Baggini, a writer and the founding editor of The Philosophers’ Magazine, discussing the way religion works, once described in the Guardian as “part describing as well as prescribing.” I sense it does just that, and I remain uncertain how to respond.

The other day I was handed a free Koran by a man outside London’s Bethnal Green station. I intend to read it bit by bit. A journey of understanding means understanding the lay of the land. It means knowing what you don’t like, and what you do, and why. So let the journey begin.