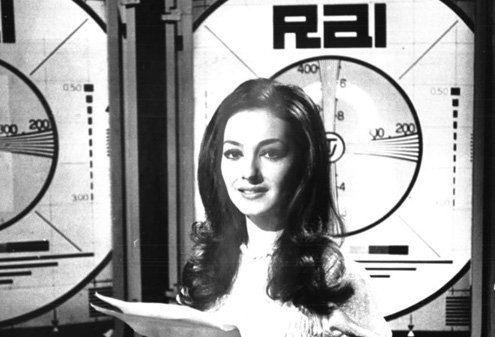 RAI in the 1970s: Two channels, lots of breaks, and programming that ended at midnight.
W

hen I first got to Rome in the 1970s I was gaga-eyed and excited. I loved everything. There were only two TV channels and I watched what was offered. One show had a regular parody in which an older Englishwoman, played by a man, would play tourist with a male companion. Her favorite word, a comic mix of Italian and English, was “picturescoe!” She naturally found everything picturesque, which allowed her Italian companion plenty of room for cynical asides.

Once, while on a mountain road, she found some small brown objects — olives, surely — dotting the ground. She immediately popped them into her mouth. “Olivay neray! Olivay neray! Picturescoe!” she cried in joy, thrilled at the picturesque black olives — after which the camera panned out to show a flock of sheep up the road.

I guess I resembled that character then. Finding the foreign student office of Rome’s La Sapienza University took me hours of trekking under a hot September sun (the only sign I saw pointed to a demolished building). When I finally got there, I waited for an hour in a massive “line” (insofar as Rome had anything resembling a line), finally coming face-to-face with a secretary who explained my application had arrived but that had to write a domanda-in-carta-da-bollo-da-settecento, not one word of which I understood, even though I knew Italian. No, of course I couldn’t get it there, said the secretary (whyof course? I wondered). I’d have to go a tabaccaio, a tobacco store (of course).

I memorized the sounds — cartadabollodasettecento — and repeated them all the way to the tabaccaio. I then returned to the “line” and waited another hour until I was told I needed to write out the domanda, an application letter, and address it to the magnifico rettore.

“Magnifico?” — the magnificent dean?” I thought, but asked the more practical question, “What do you mean?”

In the end, she dictated the proper wording — name, date of birth, nature of the request, and so on — aloud:

La sottoscritta … nata a… il … chiede di essere ammessa… — all of which I frantically scribbled down.

This, my friends, was the foreign student office. Since few foreigners had the slightest idea what they had to write in this all-important application to the magnificent dean, the secretary spent much of her day dictating the text aloud.

It took me about a decade until the full impact of my decision to move Rome hit me. When it did, it fell on me like a ton of bricks. I went from idealizing the place to hating it, coming out the other end many years later, a bit bruised, but also more balanced. America is not the same as it was, and I’d probably hate it “back home” anyway.

Every year, tens of thousands of American students are urged if not enticed to go “abroad.” Programs do their best to convince students they’re about to have the time of their lives. Some even tell students that failing to spend a semester away from the comforts of their university home base will limit their chances of getting into graduate school or nailing that great job, whatever it is. This is presented as a fact.

I came to Italy with someone. I also came to stay. I put down roots. Even though everything turned out well, it was hard. All these years later I still miss parts of my American past: the changes in the seasons, the colors of fall, the silent awakening to a snowy day, the summers of deep green. I mainly miss the people I left behind, many of them old friends to whom I’m still deeply attached. These people are no longer in my life on a daily basis.

Does anyone tell the student visitors they’ll be lonely? Does anyone mention the most obvious and important thing: That going abroad is about leaving people? Nomads take their village with them, but our modern “nomads” are expected to go it alone. Culture shock is nothing compared to that aloneness. And despite the hype, it’s not for everyone.