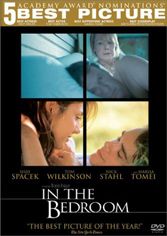 Writer Andre Dubus’s had a keen eye for the bleaker side of New England honor. Director Todd Fields does him justice in a fine movie about a marriage stricken by anger, murder, and the after-effects of injustice. Frank Fowler, the beloved college-aged son of ostensibly open-minded parents, falls for Natalie, a separated woman (Marisa Tomei) with two small children. Matt Fowler (Tom Wilkinson) and wife Ruth (Sissy Spacek) are classic “good folk,” but Frank’s unwanted relationship exposes their rifts. When Natalie’s estranged husband Richard kills Frank but gets off with a light sentence, the Fowlers snap. Field relies on the wonderful Wilkinson and Spacek, who masterfully render grief’s transformation into moral turpitude. The climax is anticlimax, but there’s no letup or end-of-the-tunnel light.