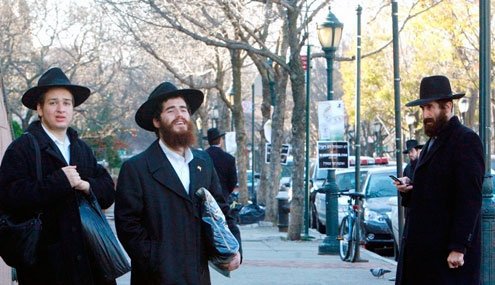 #8220;My mother is dying,” he said. “And I’m not going to the funeral.” I was talking to Fritz, my European friend. I met him when he was studying for a doctorate in the United States. Although we didn’t speak often, we always picked up where we left off.

“I didn’t know she was sick,” I replied.

“Yes, she’s had several strokes. Last time I went to visit her she didn’t recognize me. There was no connection. It was all gone.”

He was quiet. I felt him lost in images and memories.

“My brother is already planning the funeral, he and his friends with their heavy black coats and long beards. I don’t relate to them.”

His tone suddenly turned distant. I didn’t recall any mention of a brother.

“What do you mean?” I asked. “Heavy coats and beards?”

“The ultraconservative, you know, with their big hats.”

Suddenly it came to me. Hasidic Jews lived on the other side of Brooklyn. I’d sometimes see them walking around on Saturdays when I biked to Williamsburg. The men wore long heavy coats and black hats, even in the heat of the summer. Married women shaved their heads and wore identical wigs. The children walked fully dressed exposing only the skin on their hands and face. They made no eye contact and kept to themselves.

“We have Hasidic Jews in Brooklyn who dress like that. Is that what you’re talking about?”

“Yes, exactly. They are fanatics. They are planning the funeral and there’s no place for me. They just took it over. Why should I have to submit to their ideology and strange customs just to attend my mother’s funeral? I won’t do it. I already told him. I’ll see her at the grave on my own.”

Since the time we’d spoken, I’d forgotten that Fritz had been raised as a Jew. I recall him telling me stories of his father’s paranoia when anyone knocked on the door, even years after World War II ended. The house was filled with fear and tension. The effects were apparent even living in America. Fritz could be a bit skittish.

“I need to get out of here,” he suddenly said. “Europe is so stuck in the past. They always have some article in the newspaper about it. Can’t they move forward? I want to move on but they just want to keep bringing it up.”

I was quiet, not sure what to say. I didn’t know his Europe. When I visited, I was on the outside. I didn’t feel the wars lingering affects as he still did.

“I’d like to move somewhere where I can live free. That’s why I studied in the U.S. so I could get beyond all this crap. But here I am and nothing has changed. If I stay, what is ahead for me? Decay and death.”

I laughed at his dark humor, but he was serious.

“I really want to spend the years I have left living for the future.”

Over the 20 years I’d known Fritz, he’d expressed his desire to leave many times before. The last time we spoke he was just as vehement about leaving Europe. But something was clearly holding him back.

It must be the past.

“Fritz,” I said. “Before, I might have joked with you for telling me the same thing over and over. But now I’m older. Life is finite. Your mom is going to die and we not that long after. So, if there is anything I can do to help, let me know. I want you to be happy.”

There was a silence that seemed to condense all of our years as friends into a single moment. Then finally, he spoke.

“I guess there are some good things that come out of the past. It’s been my friendships. Your support means a great deal to me. Will you visit me in Thailand if I move there? You know it’s where I’ve always wanted to be.”

A laugh rose from his stomach.

“Ever the American optimist! But first, I need to put the past to rest. After my mom’s funeral that I’m not attending, I’ll see you there, in Thailand.”