In Search of a Midnight Kiss 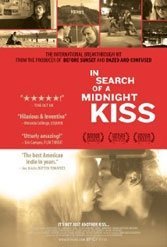 Made for a black-and-white nickel but worth its weight in gold, Alex Holdridge’s tiny indie gem is too bittersweet to suit pure romantic comedy and too quirky not to make you smile. It shows what on-the-cheap filmmakers can if they have a winningly compassionate idea and the characters to match.

“Lonely, hunker down-type” Jack (Scott McNairy) is girl-less in L.A., a wannabe screenwriter who left a sweetheart behind for bright lights, big city. Pushed by his DJ roommate Jacob (Brian McGuire), he posts a New Year’s Eve Craig List ad with the header “Misanthrope seeks Misanthrope,” and turns up an antic, manic, nutty, 21st-century Annie Hall named Vivian (Sara Simmonds), a wannabe actress from Texas who just broke up with her boyfriend Jack. She’s actually doing date tryouts (“I don’t have time to fuck around….”)

Unlike, say, “Before Sunrise,” to which this can be compared, there are no starry frills and the human imperfections open-ended. “We’re all hanging by a thread,” says Vivian, and she certainly is.

Small-town exiles in Hollywood, both McNary and Simmonds are credible to a fault, often poignantly, though the movie could do with fewer musical bridges. McGuire also shines as Jacob, a boy who believes he already has his girl, but is also hanging by a thread — only he doesn’t know it.