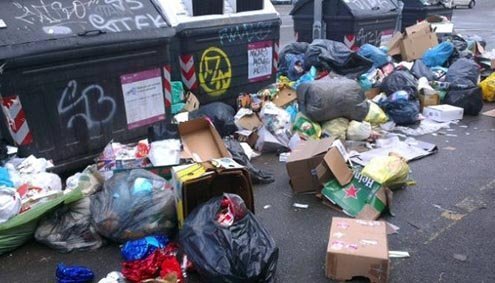 Garbage and graffiti: a lethal combination in a decaying city.
V

isiting Prince Edward Island from Rome this summer was an eerie experience — but not in a dark or scary way. The Canadian island is immaculately neat and clean. Every house — and I do mean every house — whether in Charlottetown, where I stayed, or in the countryside, seemed to me pristine. Not a broken down car or discarded toy lying about. Not a lawn that wasn’t manicured and maintained. Smooth roads and stunning bridges made driving a pleasure. The difference between the Rome I know and this place was unsettling.

I’d had a similar sensation a year ago in Istanbul, though it felt less strange. It was my first trip to the Turkish capital and I wrongly anticipated a messy and chaotic city. What I found instead was a well-groomed metropolis with fine trams and beautiful train stations unstained by graffiti.

Just after my Canada trip I went to Stockholm. That city’s unspoiled beauty alongside its waterways and archipelagos pushed me toward despair. I decided I’d been in chaotic Rome for too long.

Would I leave? No. That’s not the point. Rome is inimitable. What is the point is that it’s falling apart. Gazing up at the city center’s remarkable buildings and churches comes with risk. Famous streets are strewn with potholes. Some sidewalks are crumbling. Roads traditionally paved with “sampietrini” — beveled stones of black basalt — have gaps where stones are missing. Others are dangerously uneven from years of traffic and jagged maintenance work.

Add the ancient Roman penchant for graffiti and a city government unable keep up with garbage collection and you can’t help but wonder if you’re not watching the last stages of a great city’s sad decline.

A culture that allows people to nonchalantly discard trash and deface works by world- renowned artists is headed in the wrong direction.

On Prince Edward Island I spoke to residents about the near movie set neatness. It seemed to me residents had to be either neurotically clean or terrified of fines. It turned out to be neither. They all spoke instead of civic pride.

An IT specialist who commutes weekly to what he called “that dump” — Philadelphia — told me that if islanders didn’t care for their own communities and properties no one would do it for them.

In Istanbul, a U.S. citizen who’s lived there for years explained how the city government had stepped in. Rather than depending on civics it had hired an almost exaggerated number of sanitation workers as part of two-fold plan to create jobs and ensure the city didn’t suffocate in its own garbage.

Stockholm is another breed. Environmental awareness is a staple of Scandinavian culture.

There are as many examples of well- maintained cities as there are reasons why they are that way.

Rome, meanwhile, is busy subverting its beauty. The game of criticizing local government or elected officials for the city’s structural and environmental shortcomings leads nowhere. Without public commitment to the cause — back to Prince Edwards Island — there’s no happy ending in sight. A mayor alone doesn’t fix a city. A city helps fix itself.

Rome badly needs residents to realize the importance of what’s in their keep. Otherwise, this remarkable city of ruins will become the symbol of the broken relics it displays with pride.