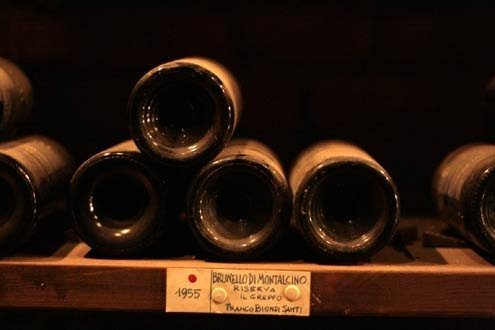 long time ago, in a wine region not so far away, lay a sleepy little hill town nestled on the rolling green hills of the Val d’Orcia. With fertile soil and ample sunlight, the area was populated first by the Etruscans and later by the Romans. After many territorial scuffles, it came under the control of the kingdom of Siena, whose penchant for record-keeping tells us that the picturesque valley had been making simple red wines for the local villagers from at least the 14th century.

More famous for its leatherworks and tanneries than its sharecropping winemakers, the town received little notice inside Tuscany or out until the late 1800s. It was around that time that Clemente Santi isolated the Sangiovese grape clone that would set Montalcino on its path to notoriety.

Part chemist and part oenologist, the pioneering Santi had decided to tinker with Sangiovese grosso, one of 14 different clones of this important Tuscan grape. He found it to be particularly well-suited for growing in Montalcino’s high-altitude, hillside vineyards. It produced a highly tannic red wine more appropriate to lengthy aging than other Sangiovese varietals.

Planting the vines on his family’s estate, “Tenuta del Greppo,” his experimentation led him to create a wine using this single grape in purezza, or in purity, with only one kind of grape. Sensing he’d stumbled upon something special, Clemente called the wine “Vino Rosso Scelto” and entered it into international competitions in London and Paris in 1856 and 1867. It won an array of prizes.

Later, Ferruccio Biondi, son of Caterina Santi and Jacopo Biondi, continued in his grandfather’s trailblazing footsteps. Ferruccio took time out from the fields to fight with Garibaldi against Napoleon. Returning from the “Risorgimento,” which laid the foundation for modern Italy, and building upon his grandfather’s wisdom, he continued to plant grafts of Sangiovese Grosso in the family’s vineyards.

Brazenly driven by his own intuition, he too began experimenting with the grapes and their fermentation, sometimes aging pure Sangiovese for up to 10 years in large botte.

Area winemakers around Montalcino were perplexed. Most of the wine being made around the hillside at the time was made from blends. Light and simple, these no-fuss wines were meant to be drunk young. Ferruccio’s wine was far more elegant, would take years to mellow and prove costly to produce. These hindrances made his ideas very slow to catch on.

Improving the wine decade by decade, Ferruccio and his son Tancredi released only four vintages of Brunello to the public between 1888 and 1945. Rare, costly and requiring patience before opening, Biondi-Santi’s wines were as delicious as they were prohibitively expensive. So much so that the family remained the only commercial Brunello producer until shortly after World War II.

This explains why that the last time one of these rare vintages was traded, the bottles sold for more than $20,000. In subsequent decades, Biondi Santi’s star continued to rise. Its majestic 1955 Brunello Riserva was both delicate and richly concentrated. Packed with flavor, with nuances of plum and lavender, the wine was hailed by Wine Spectator as one of the 12 best wines of the 20th century.

With the success of this Holy Grail vintage, the rare Tuscan red soon captured the heart of wine drinkers the world over and forever changed the face of the Italian wine industry.

But Brunello’s story didn’t stop there. Instead, it merely laid the ground work for a revolution that would put Montalcino on the map and take Italy’s winemaking industry by storm.

— This is the first in a three-part series. In part two, how Brunello producers have grown from a handful to more than 200 vineyards today — and how public demand has changed the wine.