In praise of the crummy 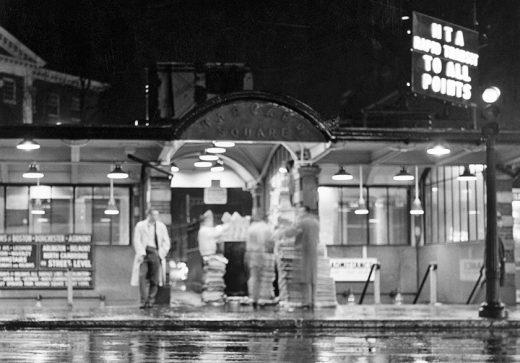 Night shot of Harvard Square in 1960: not quite bucolic…
I

was in Berlin the other weekend to visit my son. It’s not a beautiful city by any means. Many houses look alike. Few parts of the city have any real architectural character. Its famed night life means nothing to me.

Yet the city has a certain appeal.

Some neighborhoods, to use old school jargon, still qualify as crummy—where not all store windows glisten, and plastic and metal haven’t replaced the many-times repainted wood. There are plenty of shabby buildings. There are also bars and coffee shops with furniture that can seem as if it’s been chosen at random. At times the overall style, heavy on exposed pipes and roughly-finished walls, can feel like an affectation—an attempt to look and feel shabby. It self-consciously imitates the genuinely crummier parts of town.

The raw side of Berlin is real. In some places, it’s no surprise to see drug addicts huddling together against the cold asking for spare change.

But the raw side of Berlinis real. In some places, it’s no surprise to see drug addicts huddling together against the cold asking for spare change.

Meanwhile, the presence of so much wood took me back nostalgically to the carpentered world I grew up in.

In Boston of the 1960s I loved going to Harvard Square. Like parts of Berlin, it was crummy. I did an internet search for photos of Cambridge in that period but ended up finding only five pictures, none suggesting that crummy feeling I remember.

I specifically looked up some of the more famous stores and bars—The Blue Parrot, the old Grendel’s Den. Nothing. I tried finding the old Pier One Imports, which before it became gentrified sold the cheap things I could afford (it was housed in two ramshackle wood apartment houses with crooked floorboards and cracked walls painted roughly in hip colors.) Again, no pictures.

I discovered that the Brattle Theater, an old barnlike building had been demolished and rebuilt in neat brick, the theater now relegated to the basement where Café Casablanca used to be.

True, in those days we didn’t go around with camera-equipped phones. But no photographs at all?

Some time ago I wrote about my desk, salvaged from the office at work. It was a beat-up wooden thing with nine drawers and ample space for a mess on top. It had been replaced by a smoothly finished white table that could as well been made from plastic, since it lacked texture. It will probably last a couple of years.

In my old world, wood was everywhere: some of it refined, smooth, straight wood, but mostly the buckled, bumpy, textured kind. It was sometimes painted and repainted, dust and all. Many hands touched it and left their mark.

Wood is a living substance. It has cells. It possesses texture and color. It resists most mass-production methods, and is usually painted or finished by hand. Wood carries a story.

Maybe that’s what I miss most. My musician friend insists a piano takes on the character of the pianist who plays it.

Some of Berlin has a decidedly crummy feel.

A wooden desk wears down in the spots most leaned on by the user. A wood chair bends slightly over time, and the floor beneath it begins showing signs of wear caused by the many feet that have tread on it. Objects made with human hands carry the imprint of those hands.

Not all shapes are possible or even desirable in handmade wood objects, whereas plastic can make anything. The bigger question becomes: is what’s been made worth making?

If you go to Harvard Square today, there’s practically nothing that hasn’t been changed from my days there. Many beautiful old blocks have been torn down and shamelessly replaced with modern buildings. Tiny white Christmas lights create a fake atmosphere behind huge plate-glass windows all year long. The place where students could be poor but still find a place to live is gone. Now it’s a place where you have to be rich to afford even a cup of coffee.

We move through time in one direction only. As Yeats once wrote, “things fall apart, the center cannot hold.” In my own version of entropy, the warmth and complexity of wood is collapsing into the uniformity of plastic. Now is the time of smooth, non-human surfaces, all shine with no texture. Machine has taken over from hand. Everything is cold, not in temperature but in feeling. I want the crumminess to come back.