In praise of nuts 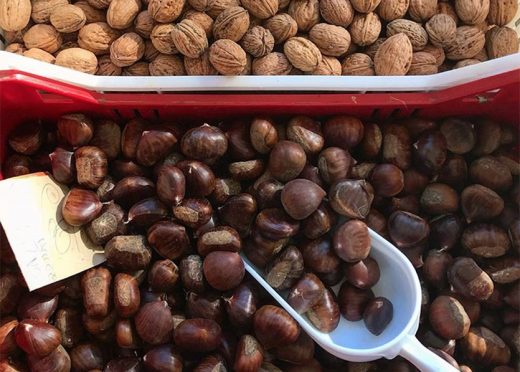 Chestnuts and walnuts are vital to Italian cooking. Photos © Eleonora Baldwin.
I

taly is a small country. Sixty million inhabitants occupy 301,338 square kilometers (think California minus 40,000 square miles). But thanks to its natural resources and historical influences, Italian cuisine boasts a staggering wealth of diversity many larger countries can only envy. One constant in the Italian bounty is the use of nuts.

While Americans tend to enjoy nuts as snacks or with drinks, Italians tend to use them as ingredients. Almonds, hazelnuts, walnuts, pistachios, chestnuts and pine nuts are all typical Italian crops. Though cashews, peanuts, Brazilian nuts, macadamia nuts and pecans are not grown locally, half-a-century of market globalization has given them passport into the Italian diet.

Known as frutta secca — botanically speaking correct since a nut is indeed a dry fruit with a seed encased in a hard, woody shell — nuts appear in all manner of regional dishes. For nut lovers, here’s an alphabetized shortlist of locally grown Italian nuts with notes on how they’re used.

Italian cuisine boasts a staggering wealth of diversity many larger countries can only envy, and nuts play a key role.

Almonds: Calcium-rich mandorle — sold whole, shelled, raw, blanched, sliced, slivered, salted or dry-roasted — are available year-round. Pulverized into flour, almonds are a great gluten-free choice in baking. Italy is among the world’s leading producers of almonds. In Sicily, these nuts star in a substantial part of the local cuisine. The town of Avola in southeastern Sicily is famous for its heart-healthy almonds. Pesto alla Trapanese employs almonds, basil, tomatoes and olive oil. Commonly made with these nuts is almond milk; pasta di mandorla (almond paste, also known as marzipan), and frutta martorana, fruit-shaped sweets enjoyed on the Giorno dei Morti (Day of the Dead), as well as in gelato and granita. The topping of Easter Colomba cake and torrone Christmas nougat both contain toasted almonds.

Chestnuts: Among all nuts, chestnuts contain the lowest amount of fat. Hooray! Appreciated for their flavorful contribution to soups, holiday stuffing and stews, they’re a constant presence in hilly locations, where Italians use chestnuts as a source of carbohydrates (the tradition of roasted chestnuts is age old). In Garfagnana (northern Tuscany), where chestnut forests blanket the rolling hills, chestnuts are reduced to flour and made into a number of sweets, including necci crêpes and castagnaccio cake. In the north — Piemonte to be exact — chestnuts are glazed or preserved in syrup and sold in pastry shops as marron glacé, a tradition that began in the 15th century. Candied chestnuts are also at the base of the Mont Blanc cake. In autumn, ice cream stores begin making gelato di castagna. Also in the fall, many small towns celebrate the arrival of chestnuts with food festivals and sagre.

Hazelnuts: In northwest Italy, bordering France, Piemonte produces some of the best hazelnuts in the world. The Tonda Gentile delle Langhe variety is protected by IGP status (Protected Geographical Indication, a sought-after quality acknowledgement). Italian confectioners and bakers rely on these nutrient-dense nuts, also known as filberts, which can be made into butter, flour, oil and paste. Richly flavored nocciole are also the key ingredient of gianduja, a mix of milk chocolate, sugar and pureed hazelnuts (the base for the indulgent Nutella spread). Hazelnuts in Italy are also a popular gelato flavor. The woodsy notes coax out chocolate’s own nuttiness, making for a heavenly pairing, hence the fame of hazelnut-filled chocolate pralines like Baci Perugina, hazelnut-studded chocolates, and confections like gianduiotti. Hazelnuts can also be crumbled and used as garnish, tumbled into torrone, ground into Rome’s famous brutti ma buoni cookies, and my favorite: toasted and peeled hazelnuts grated like cheese over tajarin noodles and simply dressed with salted butter.

Pine nut Pinoli, extracted from dusty pine cones at the foot of towering stone pines and then cracked open with a rock, is every Italian child’s favorite park activity, even more than kicking a soccer ball. Cultivated for over 5,000 years and harvested from wild trees since the Paleolithic, pine nuts are definitely not affordable given the considerable labor that goes into gathering them. In return, they provide cooks with an incredibly versatile kitchen treasure. No doubt adored for the richness they lend to pesto genovese, and enjoyed sprinkled over salad or used as topping for custardy torta della nonna cake, creamy pinoli can do much in the kitchen, from thickening sauces to lending character to macaroons and sautéed leafy greens. Cooks in Rome rely on pine nuts for their stewed baccalà alla romana recipe. The Arab domination introduced pine nuts and plump sultanas to sweet-and-savory Sicilian caponata, a ratatouille of eggplant, celery, olives and capers. Pine nuts are also present in the filling of baked eggplant and other earthy vegetables, or added to toasted breadcrumbs as stuffing for fish involtini.

Pistachios: Originating in western Asia and the Middle East, the pistachio is Sicily’s oro verde (green gold) for a reason. Pistachios have been growing in the volcanic and mineral-rich soils of eastern Sicily since the Middle Ages, but have only recently put the town of Bronte, at the foot of Mt. Etna, on the gourmand’s map. Every two years in the fall, the entire village of Bronte contributes to the harvest. Pistachios are used in a multitude of ways, on the island and beyond: ground to a fine powder for seafood panure; as one of the world’s most popular gelato flavors; ground to a paste and mixed with its own essential oils for ultra-smooth and naturally bright green pistachio spread; and as the base for croccante, a holiday brittle that’s bought at street fairs and Christmas markets. Pistachio is furthermore coarsely ground to decorate cannoli pastries, and employed in other Sicilian sweets like granita and biscotti.

Walnuts: Walnuts have come into greater favor recently because of their heart-healthy omega-3 fatty acids, but if tannins trigger migraines, walnuts should be avoided along with pistachios, pecans, and cashews. The ruffled flesh and slightly bitter, dry taste of the noce lends itself to many Italian desserts and chocolate pralines. Pasta sauce for Ligurian pansoti in salsa di noci, is made with puréed raw walnut meats, milk, bread, garlic and olive oil. Nocino, a liqueur made with unripe walnuts, is traditionally prepared every June 24th on the Feast of San Giovanni. At the end of the Christmas Eve dinner, a classic tradition is eating — in addition to panettone and torrone — dried figs and dates stuffed with toasted walnuts.