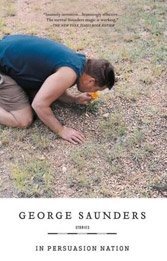 When it comes to eviscerating capitalism, product-placement, and the outrageous detritus of conspicuous consumption (cyberspace included), most writers go AWOL on the target range. It’s all too much. Not Saunders. He bypasses the too-muchness by taking a “Truman Show” tack; transubstantiating himself into the belly of the culture being savaged and belching out a kaleidoscope of farts and stains that range from the comic to the terrifying.

Lodged in his persuasion nation, where gigantic cans Raid threaten doom, are characters called Eddie the Vacant and Raccoon, Jillian from Disasters and Monkey 93990. There are Gargadisks that store Location Information (commercial prompts), which in the story “Jon” connects love and lobotomy and unsettlingly requires the Kinney Maneuver (including e-wire severance). “Brad Carrigan, American” somehow manages to connive the postmodernism gone amok into lunatic black sitcom called “TotallyFukked” where kids eat grilled mothers and a self-castrating puppet dog named Buddy shares the spotlight with corpses and commercial promos: “…Which Ho do you hate the most? Which should die? America decides, America votes, coming this fall on Kill the Ho!”)

The curdling, laconic prose of “93990” fractures both grammar and morality, building a choppy, lulling diction, Saunders’ way of making even the simplest things that much more awful. In “CommComm” beavers are harvested just before the introduction of exploding mini-steaks called SmallCows. Feeling overloaded? Most in Saunders-word feel the same” “When sadness-inducing events occur … invoke your Designated Substitute Thoughtstream.”

But Saunders controls that thought stream, determined to ensure all is as cruelly contrived as possible, because that, to him, is the way of a dark new world in which a call to 1-800-CULTURE offers promissory vouchers so long as you Celebrate Your Preferences. Or else.

No American writing today — say again — no one — is as in synch as Saunders with the mad and maddening perils of tech in concert with the hackneyed propaganda of sales. His location of that peril in a world of language sick with seizures and abbreviations makes him a legitimate visionary whose eccentric, take-no-prisoners approach puts contemporary fabulists to shame.