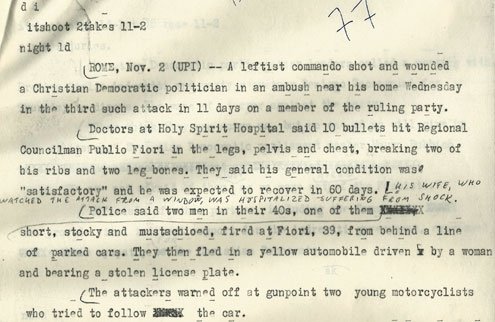 n pre-computer days, most news agencies used manual typewriters and Teletype machines to produce and send news dispatches. The system was at once straightforward, clunky and fascinating. I worked in such a bureau for two years in Rome and recently discovered an old dispatch in its original form.

Until the mid-1980s, bylines were rare and reserved only for the chief of bureau or senior members of the staff. Most dispatches were just a rewriting and reworking of Italian news agency dispatches into pithy English. They carried only the city, the day and the name of the agency, as well as geographical coding. Dispatches were usually typed on special carbon paper, with the original given to the Teletype operator and the carbon left to the staff for its records. After a dispatch was completed, always double-spaced, the writer or an editor examined it, made changes if necessary (including insertions), and ensured each paragraph was clearly marked to remind the operator.

In foreign bureaus, the mark-up process was often more rigorous since labor laws allowed only nationals, in my case Italian nationals, to operate tall-keyed Teletype equipment. Operators were skilled, fast, but often spoke no English. This made a careful look at spelling, grammar and punctuation essential. The operators typed what they saw, switching from alpha to numeric by hand since the early machinery was not automatic.

Snafus occurred when zealous editors made too many changes, marring the space between the lines and blurring words so that operators couldn’t recognize them or misread them. But time constraints rarely allowed for retyping. Instead, the better Italian operators – all middle-aged males, unlike the United States and Britain, where Teletype work was seen as a rung below secretarial work — learned the cadence and patois of English dispatches and often applied even greater rigor than native-speakers. Discovering and correcting an error was a source of pride, as well as a way to level social classes — since the operators were often not high school graduates while the journalists were perceived, sometimes erroneously, as being well-heeled. The best writer on my team was a man named Ernesto Sackler, a Trieste-born Italian who’d learned English after the war and learned to write news agency prose more lucidly than most of his British or America colleagues. He spoke with a list but rarely slipped up, often helping non-Italian speakers better understand the vicissitudes of local culture. Some news agency reporters learned to read Italian dispatches but never picked up the spoken language, putting them at odds with the Teletype operators, who regarded this as a double standard and saw the foreign employees as lazy. This made their corrections and observations all the more vital, particularly when they noticed a dispatch that had apparently misrepresented an event they knew about.

Each dispatch carried an identifying “slug,” or the abbreviated theme of the story (“itaterror” for Italian terrorism, say) with each page known as a “take,” as in film, and numbered accordingly: “first take,” “first add,” and so on. Each page required the word “more,” hand-written, to ensure the operator knew there was more. The end of dispatch was marked with the writer’s initials, “sk” for Sackler, and the letter “n” typed four times (some agencies used the hashtag symbol # or the number 30). Each take required the last word of the previous take, written out as “x x x injuries,” to ensure the operator, if in doubt, could confirm the page he’d just finished typing ended with the word “injuries.”

Agency reports were formulaic and anchored in the time-honored “who, what, when, where, why” approach to events, in which each of those questions required answering and basic explanation in the first few paragraphs. Many important novelists later credited their exposure to the news formula as essential to their work. Ernest Hemingway copied news agency style while working at the Toronto Star. Graham Greene worked as a sub-editor at the London Times. Fredrick Forsyth and many British thriller writers of his prewar-born generation worked at with Reuters at one time or another.

This aspect of their backgrounds was often little known, once again because for decades Anglo-Saxon agency journalism was byline-free. The only exception was on-the-spot reporting. If a reporter made his way to the scene of a disaster or a city under siege (or found himself there by serendipity), a byline was awarded to confer personal authority and upstage rivals. But otherwise agency writing was anonymous, behind-the-curtains work, which could not differ more dramatically from today’s personality and byline driven reporting. It was an anonymous way of learning how to tell a good story concisely.