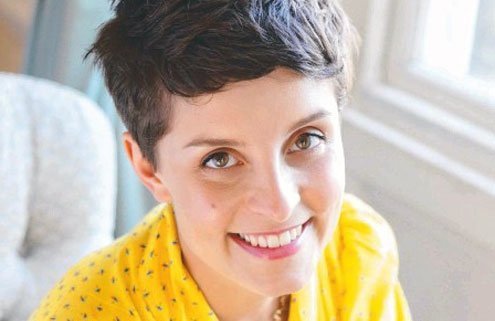 British author Jesse Burton worked as a stage actress and executive assistant in London while writing her novel.
J

essie Burton’s debut novel “The Minaturist” (Picador: London, 2014) is a double-layer pleasure. As sleek historical fiction, it unveils the ancient architectures of social dominion. As a sparkling pictorial account of Holland’s 17th-century Golden Age, it gives X-ray-like detail to an intriguing period.

Through the innocent eyes of 18-year-old Nella Oortman Brandt, we’re introduced to the wealthy Brandt family as a microcosm of upscale Dutch social life. Then, with a plot assist from an elusive miniaturist, Burton strips away the Golden Age gilding to expose far darker realities.

It is mid-October 1686. Nella is lone passenger on a water barge carrying her from country home to a new role as wife to handsome Johannes Brandt, a senior Amsterdam merchant prince.

When the barge churns into Heren (Lord’s) Canal, stately merchant mansions announce Holland’s international clout and wealth. They represent so many golden guilder coins allegedly earned thanks to total individual submission to the nation’s Calvinistic Protestantism, and to rigorous Corporations. A bloodthirsty volunteer militia punishes any infringement of “the public honor.”

Nella arrives at the Brandt Golden Bend portal carrying a birdcage with a pet parakeet. But there’s no sign of Johannes’s sister Marin, or Johannes. There’s been no word from him, in fact, since two months before, when he arrived in her village to confirm their arranged marriage in a “blink of the eye” ceremony, then disappeared. A worldlier bride might have become suspicious.

In the great hall she finally meets sister Marin, black-gowned and wearing the traditional tight white head cap. Without greeting, Marin tells Nella: “The parakeet is messy and goes in the kitchen; you, to your room. I’ve given you mine.”

And so Nella’s life of solitude begins. Despite the famed Brandt wealth, there are no warming fires. Meals offer bread and dried herring. Yet while preaching fierce Calvinistic frugality, Marin secretly lines her gloomy gowns with soft, rich sable. The house, its masters and two servants hold many secrets.

Paintings in Nella’s room reflect period still lifes: over-ripe flowers and fruits, dead game birds. All is edging toward decay. She turns the paintings around so they face the walls. But can’t so easily turn round her empty days.

Until Johannes arrives home awash in good spirits. Her husband? Not quite. Before quickly retiring to his locked room, Johannes gives her a present, a costly, dollhouse cabinet of the Brandt home. Rich merchants’ wives traditionally furnish the ornaments to suggest family wealth.

Later he will give her gowns to wear to a party at the great Dutch East India trading company, to which Nella wears a dress of golden cloth. “You look like a coin!” a partygoer exclaims. They certainly want to see her tiny cabinet when it’s decorated.

If the author’s Nella Oortman is fictive, a real Petronella Oortman decorated a similar piece, now on view, unfurnished, in Amsterdam’s Rijksmuseum. It’s a model for the fictional Brandt home, and its rooms. In coming pages Burton will use her talent for mixing the duplicated and the real to reveal torturous double lives, and duplicity.

At first, Nella seems to have the bland job of dollhouse furnisher — until she makes contact with a local miniaturist who specializes in ornaments. At that juncture, Nella, like Alice in Wonderland, tumbles down the rabbit hole. And the reader with her.

Her first order is for two armchairs and a table. But their delivery proves traumatic. It seems the artisan has inexplicably and intricately captured real pieces in the Brandt home. To Nella’s distress, yet another package, this one not requested, arrives. It contains a tiny birdcage, and a perfect carving of her parakeet. The curious package also contains a scripted note from the sender: “I struggle to emerge.”

Attempting to meet the elusive miniaturist, Nella manages only swift glimpses of a woman running from her, and a forbidden sight: the woman’s long, blond, free-flowing locks. No cap? The artisan is social outsider. Is this why she continues to send unordered furnishings and household figures – to underline an abyss between the Brandts’ public conformity and their dangerously unconventional private reality? How many characters here have struggled to emerge?

No use giving away all the narrative secrets, but Burton knows how to make both plot and sub-plot thicken. She surprises with her miniaturist’s exquisite packages, which seem to anticipate the fate of their recipient.

Probably spurred by this engaging device, her publisher, like the Brandt family, made a costly choice. For book jacket photo, a carpenter was asked to re-create the Rijksmuseum model; a miniaturist for the novel’s household. Gorgeous cover. Possibly misleading?

For Burton’s interest in follies and foibles is minor, and decorative. Her chief prey is Holland’s Golden Age and its repressive social scaffolding from which some will fall.