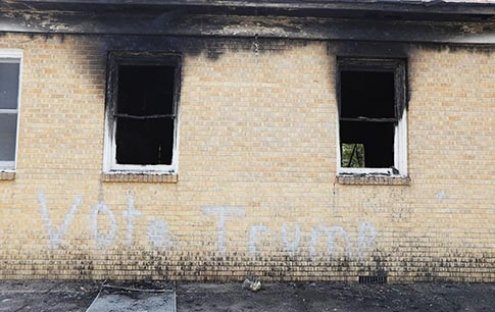 There was no doubting the message on the wall of the Hopewell Missionary Baptist Church in Greenville, Mississippi.
A

Mississippi church burns, the billowing flames threatening the firmament. The words “Vote Trump” are crudely spray-painted on the bricks of the outer wall. Hopewell Missionary Baptist Church of Greenville, Mississippi, turned into a charred shell on the night of Nov. 1, 2016 — a week before the presidential election. Greenville is known as “The Heart and Soul of the Delta.” It’s a place where cotton was once king. Slavery once flourished around it.

The attack shouldn’t have come as a surprise, not these days. Americans have been demonstrating an uncanny ability to attack each other based on differences small and large. Yet these kinds of events have a way of making the ghosts of a relegated past seem all too tangible. They harken back to a time in which Americans self-righteously destroyed each other’s humanity, tradition, and sense of safety. More ominously, they suggest those times may never really have been left behind.

I live in New Orleans. I’ve been working in the American south for years. I’ve come to believe America is great in many ways, but singularly great in one awful skill: knowing how to express hatred and set fear into the hearts of its enemies — even if its enemies are its neighbors.

The so-called liberal media — such as National Public Radio — while condemning the burning, reminded us that these kinds of incidents take place regularly, especially around presidential elections. On the night of President Barack Obama’s re-election, for example, students at Ole Miss University rioted and allegedly chanted racial slurs, threw rocks, and marched towards the school’s traditionally black dormitory. It was a stark reminder that behavior presumed to have ended decades ago is rekindled when presidential politics enter the mix.

But after the election of Donald Trump, the burning of Hopewell Baptist carries even greater significance. The attackers had their crosshairs aimed at two kinds of differences: racial and political. They understood the powerful tradition and community built into the fabric of an African American church. They attacked and burned down a place of safety, activism, and mutual support. In rural Mississippi, friends, family, and society is commonly structured around a place of worship. The flames symbolically burnt down a way of life.

The Hopewell church burning was the first of its kind in Mississippi for two decades. Coincidentally, the last burning also took place in the final stretch of a presidential election season. In that year alone, 1996, 26 African American churches were attacked, almost all in the south, and the incumbent president, Bill Clinton, struggled to put a halt to the random acts. That mid-1990s rash of hate-fueled arson began in Pike County, Mississippi in 1993. It was the first church burning since the 1970s, when the Civil Rights era was still in full swing. Yet Clinton was reelected and the arsonists found themselves on the losing side.

While most Americans have voted against hatred since then, something changed with Trump’s victory. We can all agree that the campaign itself heightened already incendiary racial tensions. Trump’s attacks on Mexicans, “inner-city” African Americans, and Obama’s life and legacy revived a slew of preexisting divisions.

The “Vote Trump” scrawl in the context of a church burning was both a threat and a declaration of personal ideology.

The six most recent church burnings nationwide (including Hopewell Baptist) have all taken place since the 2014 murder of Micheal Brown, Jr. by a Ferguson, Missouri police officer. The first burned church was Flood Christian, where Brown’s father had been baptized, and where the pastor had spoken out against the release of the offending officer. Today, Trump is president, a result that implicitly condones the civil rights violations that have effectively intimidated minority voices.

Fifty miles up the road from Hopewell Baptist and 42 years ago, Fannie Lou Hamer ended her painful, strong, activist life in Mound Bayou, Mississippi. She had experienced the threats of white oppression personally: she grew up picking cotton with her family, and received an unauthorized hysterectomy when undergoing surgery for a tumor. Nonetheless, she registered to vote in 1962, and was fired from her job as a result. Throughout her activist career she was beaten, mocked, berated, and interrupted on national television for advocating equal rights on behalf of African American citizens.

Hamer’s fight was a deeply spiritual one. Despite the challenges, she maintained a true hope, and spread that hope to those around her. She was recognizable during protests for singing “Go Tell It On The Mountain” and “This Little Light of Mine.” Today, we must remember her ability to celebrate in the face of extreme racism, classism, and sexism. Like her, we must bond together, continue the fight for equality, and sing.