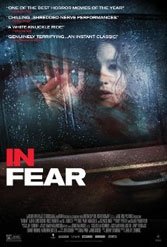 To paraphrase a Shakespeare sonnet, writer-director Jeremy Lovering’s horror thriller throws spirit before shame. Spirit because the story has one, at least in its opening moves; shame because it wastes what little it has. Not-yet-an-item lovers Tom (Iain De Caestecker) and Lucy (Alice Englert) are headed to join friends at an Irish festival when lusty Tom has a sneaky suggestion: why not skip the festival and bed down at the remote Kilaidney House Hotel, billed as “Your slice of paradise on the Emerald Isle.” Bad idea. Intrigued but uneasy Lucy capitulates, and off they drive into a deep and dark forest that, signs notwithstanding, becomes a no-exit maze with perils aplenty.

Lovering’s early leverage, the uneasy play between new lovers, soon yields to hackneyed horror ploys and the introduction of madness’s master of ceremonies, Max (Allen Leach), who, of course, exists to mix rain with blood and utter lines such as, “Violence is the mother and the daughter.” (On the heels of Tom’s typical girl-reassuring, “We’re getting ourselves into a panic, and it’s just stupid.”)

Moral of the story, such as it is: don’t visit backwater hotels you found on the internet, not if you have lust on your mind, which in the same sonnet Shakespeare rather excitedly calls murderous, bloody, savage, extreme, rude, and cruel — all of which apply here, though not very convincingly.