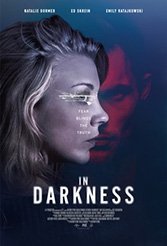 In Anthony Byrne’s dimly lit thriller, Natalie Dormer is Sofia, a blind concert pianist who at first blush seems demurely set in her London apartment ways. Enter Veronique (model Emily Ratajkowski), a Balkan mystery woman who lives above her and issues only cryptic snippets. One night Sofia overhears shouting and a scuffle, after which Veronique plunges to her death.

Quickly, Byrne pulls viewers down a primrose path inextricably linked to 1990s Yugoslav war crimes. Veronique, as it turns out, was the daughter of one Radic, a Serbian rapist and mass murderer-turned-businessman who Britain won’t extradite. Veronique was no fan of her father’s. Nor is Sofie, who in fact is a Bosnian woman plotting to kill the man who slaughtered her piano-playing sister and family (covered in flashbacks).

A cop investigating Veronique’s death sniffs around Sofie’s incongruities from the start: “Even when you lie, you tell the truth. “And lie she does, tailoring the past to suit the needs of the present, her ruses eventually subverting the film’s central premise.

By turn clever and foreseeable, “In Darkness” mostly concerns three women (the third is Radic’s duplicitous secretary) plotting separate but parallel means to avenge the horrors of the past, blood-makes-blood style.

Dormer is adroit, but the twists and turns of the film’s midsection make for an unconvincing sex scene and leaden speech: “Whatever game you think you’re playing, you’ve stumbled into someone else’s.” Dormer’s calculating Sofia does anything but stumble. She’s ominously remote from the start, her character reflecting the movie’s title. It doesn’t help that Byrne has the deeply British Sofie escaping her Bosnian village not in infancy but at age six, by which time a child’s speech patterns and cultural tics will make their way into adult mannerisms. The only unsolved mystery is why Serbian villains are all called Radic, by now tantamount to “monster” in cinematic cliché.