In an immigrant’s words 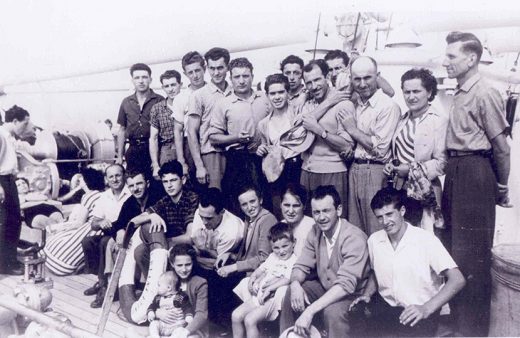 Between 1880 and 1914 some four million Italian migrated to the United States, most from southern Italy and Sicily. More would follow in the inter-war years.
I

n person, Henry stood a tiny bit taller than his push broom. Five-two, tops. Frayed khaki work pants, a faded flannel shirt, gray hair combed straight back, and a neat salt-and-pepper mustache. He worked alongside me as a laborer in New York’s World Trade Center towers in the early 1970s.

I was a carpenter. My job was to open up the brand-new ceilings in the Twin Towers so that the pipefitters could install a sprinkler system. Somehow, the architect and general contractor forgot that sprinklers were required. Because of this glaring oversight, our job was categorized as a retrofit, subcontracted to the buildings on a time-and-materials basis.

Which is to say, my job was to remove ceiling tiles as slowly as possible without stopping completely, and Henry’s job was to clean up the mess I was not making with equal speed. The slower we worked, the more money for us and for our boss. In workers’ jargon it was a “tit job.” But it was also an exercise in excruciating boredom.

Henry was in his early 60s, not fit for actual laboring, so it was fortunate that his duties did not go beyond sweeping up the occasional clump of asbestos that fell out of the ceiling when I removed a tile. He and I had lots of time to talk.

Henry was born in Calabria on a mountain near a small village. His mother carried firewood on her back for a living. She was barefoot and without a donkey.

He was born in Italy’s deep south, Calabria, on a mountain near a small village.

“My mother didn’t go barefoot up the hill every day to get firewood because she didn’t have any shoes.”

“No,” replied Henry. No shoes. Worse still, no donkey.

Henry had a wry sense of humor, and no faith that I could imagine the conditions he grew up in.

But I pictured it. His mother, who had no shoes and no donkey, carried firewood on her back for a living. She had a hen that was too starved to lay eggs and too quick to turn into soup, pecking uselessly at the dust. She had a little boy who imitated her by picking up bits of dry grass. He stamped bravely at grasshoppers, making them flee.

“You know who I hate, Joey? I hate my father. If I see him today, I kill him.” He accompanied this threat with some lashings of his broom. He made to spit, but checked himself out of respect for the ugly Trade Center carpet.

“He went to America, Joey, and came back once a year. All year, my mother tells me my father is coming and he’s going to bring presents and candy. Every year, he turns up with some crappy thing for me — a little tin fish, a whistle. One year, he brings me a piece of string.”

“A piece of string!”

“Yeah. But every year, he gives my mother another baby. For seven years. Then he never comes back no more.”

“I apprenticed to the village shoemaker. But, Joey, in a town that poor, not enough people buy shoes, so the shoemaker had to be the barber too. So my first job was to stand on the rungs of the chair to reach up and lather the cheeks of the customers.”

“Whaddaya think, there was a barber chair? No, it was just a kitchen chair, and I stood on the rung and hung on to the back with one hand while I lathered with the other.”

Henry laughed, almost losing some of the spit he had spared the carpet.

“You know what’s funny? This village didn’t have a dentist, so all the customers had lost their teeth. In order to get at the whiskers, the barber had to stick his finger in their mouths to push their cheeks out so he could shave them.”

He paused, shaking his head at this recollection.

“How did you get here, Henry?”

“Here in America? On a boat. In the Depression. My uncle sent money, brought me over and got me a job in a shoe repair in the Bronx. I made a nickel here, a nickel there. I survived.”

Later, he had his own shoe repair on Fordham Road. And when the shop didn’t make money any more, his son-in-law got him into the laborers’ union and they retired him to this so-called job in the Twin Towers.

Henry was no stranger to prejudice. To many people who were already here in this country when he arrived, he was a “guinea” or a “wop,” a lazy, dirty, criminal drain on the resources of a great nation.

But Henry was prejudiced too, against blacks, Puerto Ricans, and especially Sicilians. Barefoot as she was, his mother had been such a Calabrian supremacist, she insisted that the so-called Leaning Tower of Pisa was a hoax. “Leaning!” she said. “What nonsense. Those Tuscan liars!”

After the stock market crash of 1987, I became a refugee myself, fleeing New York for Washington state in a truck with my wife, two babies, and an assortment of other hungry animals. We lived in a tent on Vashon Island for a windy, wet, cold winter. And I was despised by the upright Pacific Northwest construction workers —shiftless, lazy New Yorker that I was —stealing jobs from honest Seattle carpenters.

Lucky thing they didn’t have a wall at the Idaho-Washington border to keep us aliens out.