In a Strange Room 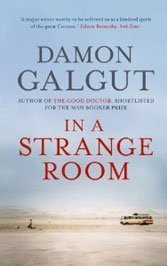 Damon Galgut’s wanderlust novel drops no anchors. Time contracts and expands, locations vanish. Narrator (also Damon) skids mid-sentence from first person to third; geography shifts from Greece to India. Movement is the only constant in this strange tale about the pathos of never-ending travel.

Damon’s age is not given, although his sensitivity hints at youth. Backpacking in Mycenae he crosses paths with fellow wanderer Reiner, a German who detests the concept of borders (“just lines on a map”). Reiner seduces Damon without touch; there’s a hush-hush to their intimate companionship. Months later the pair is together again, hiking South Africa into landlocked Lesotho. Despite Reiner’s step-ahead independence (and Damon’s reservations) the two become, “committed to a situation of which the outcome is unknown, travel and love have this much in common.”

But travel can put an abrupt end to love. With Reiner, Damon ceases to wander. He follows. Their mutual abandonment in the woods of South Africa after weeks of unspoken tensions leaves an acrid taste. Dampened, Damon now enters Zimbabwe, seeking camaraderie among European nomads. The Europeans, with their shared continent in common, take in Damon but on the side view him as a, “fucked up South African.” Damon touches the heart of one, Jerome, but as with Reiner, they’re so drawn to each other they have nothing to say.

Months and years elapse at random. By the novel’s third act Damon has succumbed to the role of guardian over chronically depressed friend Anne. They share a holiday trip to Goa that is at once fated, ugly and ruthlessly human. All thrashes and churns to a sober end.

Galgut’s spare writing evokes fellow South African novelist J.M. Coetzee. Sentences are slender and hypnotic. There’s something gothic about them, too, which could explain the title — a line from William Faulkner that Damon reads before bed one night (“In a strange room you must empty yourself for sleep… and when you are filled with sleep, you never were”). A finalist for the 2010 Booker Prize.