In a Shallow Grave 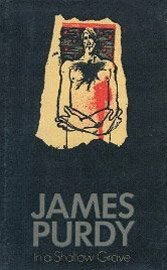 American novelist James Purdy was never able to dim the “controversial” label that weighed him down for much of his distinguished if erratic career. Defining the controversy is work for scholars. The fact remains that Purdy’s 20th-century vision was salient and uncompromising, and so remains. It is at its keenest in this brutal short novel that can seem at times more like a protracted lament or dirge cast in the rural vernacular of the baptismal if godless American southlands.

Garnet Montrose is a disfigured Vietnam veteran, “my veins and arteries being all but murdered,” his buddies “safe-dead,” who now lives alone in his ancestral Virginia home by the sea. Too grotesque for a companion — though he craves a nearby widow, once his high school sweetheart — he hires as “applicants” two loners, a laconic “nigger” named Quintus Pearch and a Utah stranger (and murderer) named Potter Daventry. They read to him, deliver love letters to the widow, and wash his feet, Christ-like.

Gradually, the widow and Garnet each fall for Daventry, endowed with a divinely mystical streak (“…not human, but a messenger…”) that is no more of this earth than Garnet, who leper’s scars have reduced him to the status of walking vapor. He is a universal war victim — “massacred and yet left among the living” — with nothing good left to say about a stormy earth that is in many ways is as disfigured as his body and face.

Purdy plays off these dead-men-walking, giving them animus and fierce energy, but of a pointless kind, since their visions and repentances serve no purpose. War kills and “white Virginia” life kills a second time, separate but equal in their estrangement. Purdy’s language possesses biblical syncopation. It is pure verve of the kind Cormac McCarthy brought to bear in his own but different way. His is a Virginia of no survivors that happens to harbor three lost souls whose antediluvian flesh and blood peels away like Christian myth until the land is literally torn asunder, Revelation-like.

Garnet and Daventry are “…one soul in two tormented halves,” not so much a matter of homoerotic love than a double quest for human compassion that remains incomplete. “Tomorrow is not a word I can pronounce,” says Garnet, the “dead man who goes on living,” nor can anyone in Purdy’s ruined, slavish world command its meaning long enough to command love.