In A Quiet Place 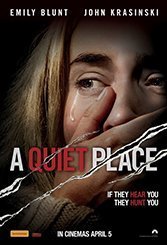 Rarely does a film open with the sounds of a child’s tiptoeing and linger on those furtive sounds as if to convey an ominous message. Actor-director John Krasinski’s movie does just that, at once tender and eerie, sending just such a message and acting as a harbinger for terrifying things to come.

The child, foraging for toys in the detritus of a drugstore, is the youngest in a family of five, the Abbotts (never named), which includes two boys, a deaf girl, and husband and wife—all trained in silence and sign language to keep an invasion of winged reptilian invaders from knowing of their presence, since these aliens are sensitive to sound frequency only, a clever twist. Over time, the human family, survivors of the global invasion, has learned to work around the alien presence using this strict code of silence.

They leave their rural home only to scavenge for food and medicine. Otherwise, their home is their bunker.

But things go awry early: one child is lost to too much sound, and the rest of the family, try as it does to remain quietly intact, will soon find itself in harm’s way. Krasinski uses his superb first hour to establish family bonds and priorities in the context of survival only. “If we can’t protect them,” the pregnant wife (Emily Blunt) tells her husband (Krasinski), “who are we? Who are we?” These two lines are the movie’s only substantive spoken dialogue, and thematically they say all that needs saying. A visceral, claustrophobic mood does the rest.

But their deaf daughter, still grieving over the death of her younger brother, is recalcitrant. She bolts, making herself potential prey. Piece by piece, the family is imperiled.

At this key juncture, Krasinski, who co-wrote the script, turns over much of the narrative propulsion to his letting their grotesqueness have its way with viewer emotions. Yet he also furnishes some fine tidbits: wife Blunt, a frontier-woman creation at heart, must deal with childbirth and alien-repulsion at the same time; deaf daughter (Millicent Simmonds) has a hearing implant, built by her patient father, whose high pitch proves useful. There’s a Hitchcock-worthy scene set in a grain silo. As a whole, “In a Quiet Place” is an alarming ode to silence by necessity on a planet, ours, that won’t shut up.

The only shortcoming is the plot’s eventual (and predictable) surrender of subtle menace to marauding monsters. Little about the ways and means of the creatures is left to the quiet imagination. This choice makes for a last-man-standing climax that’s miles from the tiptoes of the opening.

Still, Krasinski’s movie is uncommonly smart and consistently engaging. In a cinema era that makes merry with monsters, zombies and superheroes, here’s the story of a family locked in a lethal duel with intruders and pushed to the limits of its own resources and ingenuity.