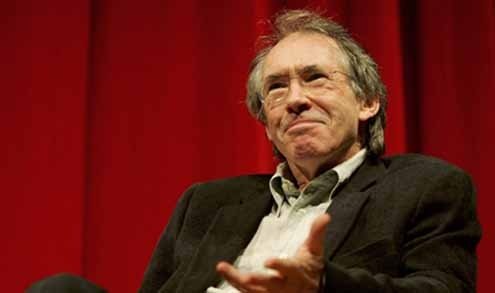 British novelist Ian McEwan has a fetus take over narration.
I

an McEwan’s 15th novel, “Nutshell” (Jonathan Cape, 2016), is a virtuoso riff on Shakespearean themes. For starters, he links its unique fetus-narrator to Mom-obsessed Hamlet, “Oh God, I could be bounded in a nutshell…” Language-play is abundant — perhaps too abundant — as are Oedipal plot tricks.

Yet McEwan makes savage use of these satirical tools. Hamlet’s Elizabethan grand tragedy is contrasted with Hannah Arendt’s contemporary vision of evil as banality, which she applied to Nazi world’s exterminating bureaucrats. In line with this vision, “Nutshell” deftly portrays a culture so prosaic and “unthinking” that even murder becomes entirely “thinkable.”

Our narrator-soliloquist — safe in his late-term placenta chamber —overhears his gorgeous 28- year-old mother (Ger)Trudy and her brother-in-law lover, property manager Claude(ius), calmly scheming a happy future at the homicidal expense of poet and publisher John Cairnross, her (separated) husband and the baby’s father.

Despite swooning along with Mom in her orgasmic conjuctions with Claude, our tiny narrator is worried. “I’m hearing pillow talk of deadly intent and I’m terrified by what awaits me.”

But what’s an unborn fetus to do?

Look to “Hamlet” for answers. Remember Claudius swiftly poisoning Hamlet’s father? These 21st-century lovers intend to slip glycol-laced antifreeze into John’s favorite Smoothie. Glycol freezes the liver, making death horrendously painful. Cliché Claude assumes the police will suspect suicide. Trudy frowns. Ethical doubts? No way: she’s worried an autopsy might reveal the poison. Claude is the voice of reassurance: they’re tell the police he killed himself because he’d been depressed by the separation. Plus, the poison acts fast and leaves no trace. It’s “curtains” for John.

McEwan has a fine ear for the highs and lows of dialogue. The tale may sound dire, but this is murder without tragedy because the author’s three adults — Claude, Trudy, and John — are card-carrying members of the amoral London upper middle class that has long obsessed McEwen, though his versions haven’t always been the best of prototypes for broader social analysis. In “Nutshell,” he works to dissect their mindless greed, and the ploy works unsparing satiric wonders.

The tone sets up a deathly but banal outcome. Our fetus’s grim worries about sensual mom and her grasping real estate salesman are in comic contrast to his refined and distinctly Elizabethan speech. “My thoughts unspool in well-sprung pentameters, end-stopped and run-on lines in pleasing variation.”

In fact, the novel bulges with LOL incongruities. The Trudy-John dalliance is barely credible. To make room for Claude, she tells John she needs “space” to think before giving birth. John protests mildly but moves to a small and seedy flat while Trudy remains in their rundown but pricey Georgian home in exclusive St. John’s Wood. Claude calculates their post-assassination inheritance will earn them millions, after which they’ll “leave the baby somewhere” and start anew.

In their hasty ambition (but not their sexual antics), Trudy and Claude slightly echo Lord and Lady Macbeth. “We have to kill him. Now!”

Once our homunculus stops floating in a watery field, no longer “nutshelled,” he suffers Claude’s relentless penis pokes. Worse, he frets that the ruthless couple will follow through with their pledge and dump him.

Yet the lovers seem oblivious to police procedure. When a hale man (John) drops dead for no apparent reason, police tend to consider it a suspicious death, with the Trudy-Claude cohabitation perfect fuel for any investigative fire. If they’re caught, charged and convicted, will Trudy give birth in jail? Will she raise her child there? Should our inside man try to save his mother? His father? And why doesn’t John ever mention his soon-to-be-born child?

McEwan’s use of Shakespeare nourishes a game built on contrasting morality. Today’s is rife with bytes about genocide, mass murder, casual homicide — all efficiently inflicted with chillingly casual indifference.

Against this sullen backdrop, he first creates potentially high drama, only to deflate tragedy through comic turns, all the while maintaining a disturbing sense of malevolently careless evil. That quivering tone combined with McEwan’s nimble prose to make “Nutshell” one of the year’s best novels.