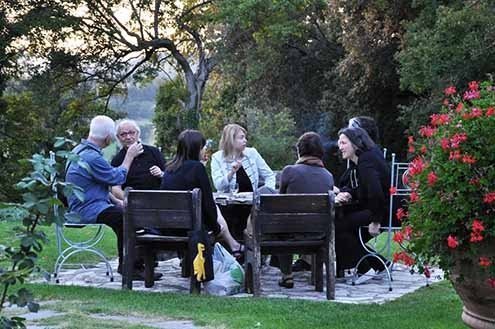 Cultural exchanges, including those promoted by the Civitella Ranieri Foundation, are a lynchpin of the American ethos.
G

erman Chancellor Angela Merkel recently said what many already recognize: Europe cannot rely on the incumbent president of the United States — which in blunt terms means it cannot rely on the U.S. itself. President Donald Trump is openly skeptical of longstanding NATO alliances, has refused to denounce Russian aggression, disparages global trade deals, and is pulling away from climate change agreements.

Trump’s preferences may end up placing even cultural exchange programs at risk. Long a bulwark of international relations, these exchanges have helped boost international ties for decades, often in a far more effective way than grandiose summits.

Let me take a case of an Iranian journalist whose name I cannot mention without putting her at risk. In Iran, her work is censored by a clerical regime that has lorded over both the press and the arts for decades. Her foremost goal is the completion of a book about her country’s political system and its layers of backdoor alliances. She’s convinced Iran’s governing culture needs overhauling to fit into the global community, a community this American president ironically finds of little interest.

Completing the book at home is impossible for obvious reasons. What might help her most is a fellowship from one of America’s cultural programs whose stated aim is to identify and invite talented artists from around the world. Invitations to such programs helps facilitate meetings between writers, composers, musicians, visual artists and scholars in an egalitarian setting intended to encourage their work without fear of censorship or reprisal. The U.S. Department of State still funds the Bureau of Educational and Cultural Affairs, once known as the U.S. Information Agency. Despite a limited budget, it oversees a number of international exchange programs, public and private, including the Fulbright fellowships.

Italy is the seat of a number of program outlets: there’s the Rockefeller Foundation in Bellagio, the Bogliasco Foundation outside Genoa, the American Academy in Rome, and the Civitella Ranieri Foundation near Perugia. All are incorporated in the U.S. and have their headquarters there. Their existence in Italy was made possible by the provisions of a U.S. treaty program created more than two centuries ago.

Just after the 1776 signing of its Declaration of Independence, the fledgling United States of America sought ways of establishing itself in a world still dominated by half-a-dozen great powers. To expand trade beyond the original 13 British colonies, America would need access to countries with robust economies. But just access would not be enough.

The new and still weak state would also require protection for its vessels. Three interconnected needs immediately presented themselves: the right to enter other countries to invest and promote trade, the right to make such trades, and to enjoy individual human rights in the process.

Toward this goal, America created so-called Friendship, Commerce and Navigation (FCN) pacts with individual nations. The goal was not only to obtain national political recognition but also to ensure the mutual safeguards necessary to trade. The first FCN was with France in 1778 and the final one with Thailand in 1967. In between came more than 40 others, including one with Iran in 1955.

Favored nation status with a treaty partner meant the freedom to enter foreign ports with reduced harbor fees. Custom duties on imports were also lower. FCNs acted as precursors to modern-day free trade agreements such as the General Agreement on Tariffs and Trade (GATT) and similar regional agreements Trump views with skepticism.

These pacts also covered the right of entry, which allowed citizens of treaty partners to reside on another nation’s soil, travel freely, and work in their occupation of choice. They also let non-national residents purchase real estate, engage in business, make commercial investments for profit, and bequeath property.

The U.S. and Italy signed their FCN in 1948. It permitted the legal recognition of many U.S. cultural programs while encouraging American colleges to establish branches throughout the country. They include Johns Hopkins’ widely recognized Paul H. Nitze School of Advanced International Studies (SAIS) in Bologna.

Even if the U.S. refuses to grant a visa to a foreign national (take the Iranian journalist), a U.S. cultural institution operating in Italy — or elsewhere where such a treaty is force — can still move ahead with the invitation. Bringing together fellows of different nationalities in an atmosphere of shared creativity is considered a fundamental part of the American ethos.

In fact, the U.S. has been a forerunner in the creation of cultural exchanges. Its customs and laws have encouraged artists of divergent views to enter the U.S. and its treaty country partners.

But there are two parties to any treaty. The withdrawal of one or the other is always an option. And given the mood of the Trump Administration, that reality is more unsettling than ever.