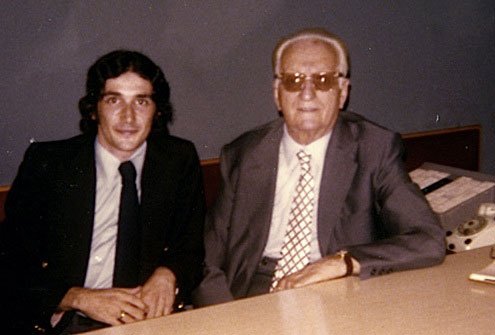 The author and Enzo Ferrari. Below, his signature.
D

im light gives you the meat of a face. His was amber and mottled. He wore marmalade glasses with the heft of goggles. His employees referred to him only as l’ingeniere, “the engineer.”

To visit him, we’d gone north by train into prematurely wintery Italy. In Bologna, my mother told the story. She had fled Warsaw in 1939 with her mother and found refuge in Rome. After her mother was caught and deported, she forged a new identity and hid out with Italian friends. One of them knew a pianist near Modena. The engineer also knew the musician and the furtive group gathered in a country house where Cravaro — that was the pianist’s name — played Chopin and jazz. They’d all get a little drunk and bypass the stains of war. The engineer, in his mid-40s, was forthcoming.

Not so in the dusky room. He embraced my mother but looked beyond me.

She had last seen him since 1967, when he’d driven personally to the Modena train station to pick her up. Now, he no longer drove. Reflexes, he said.

Did it bother him? I asked.

Men whose sons die young — the engineer’s did, Dino, in 1956 — impregnate regret. He’d transformed his son’s office into a candlelit chapel. While I sought derring-do tales of wind-chafed red cars, he wanted nothing of it.

“The youth of today faults us — me, your mother — because we lived life to the fullest. We were not so serious. We tried to laugh, to make light of what we had. We did this because we were so sad after the war, and if we had allowed ourselves to be serious again, to mourn, we would not have been able to surmount the difficult moments. You do not know war so you cannot understand this.”

The engineer — always ingeniere — had brick-like hands. His lenses were outsized, like puffed-up beetle shells, brownly menacing. “Sometimes, journalists say what we do here is like a war. It is not. It is a competition. We cannot be so serious.” This was like hearing a great soccer coach trivialize the significance of important matches while seated in a room full of trophies.

My mother changed the subject to music. “I remember those evenings with great tenderness,” he said. “We were in crisis and yet there was so much hope, so much to look forward to. Now, we are in twilight, like this evening,” and he gestured into the courtyard.

He paused — and relaxed.

“Once, you drove for primitive reasons, the desire to win, which was a kind of immaculate anxiety. It now exists only at the start of a race. There wasn’t much money. [Tazio] Nuvolari [an ace of the 30s and 40s] would race with broken ribs. He lost his two young sons and then went out to face death in every race, almost challenging it to take him. And yet fate saw him die a humiliating death in a hospital bed.”

The legendary Nuvolari, who drove for Alfa Romeo, died after a long illness in 1953.

The engineer gave us 40 minutes. When the phone rang, he rose. “Please,” he told my mother, “please come back.” La prego. And to me: “Be a good journalist, not an exaggerator.”

My mother handed him a post card with a red car and a prancing horse and he scratched at it.

No greeting. The signature was just his surname, Ferrari.